I was so friggin’ excited to see that I had gotten my much-anticipated BETA access to feathe.rs, a new distraction-free writing app for the web. I’m incredibly passionate about publishing and experimenting with alternative blogging and publishing platforms is both my job and hobby and, well, everything else in between.

I can’t remember when I had first signed up for the feathe.rs invite but it has been a wait – I put everything on hold the moment I saw it in my inbox and sat down thinking that I would be there for quite some time.

5 minutes later I would find myself standing up, heading back to my kitchen to start a pot of coffee (even though I had already had my afternoon fill) because I was so disappointed.

Let me be clear – I understand the thing is in Beta (which means anything at this point) but the application is so severely lacking in the very basics of online publishing that I couldn’t stand writing in it. The elegance of it’s UI or sheer simplicity quickly became less of a work of art by a deft artist and rather the work of my 6 year old (I’ll admit, she’s no Picasso). It was vastly elementary and had much to be desired.

Let’s start with a 60 second video showcasing everything that you can do in the application – that’s right, 60 seconds to demo every single function available to you:

If you’re left with your heads scratching your head then you’d join the ranks of the unimpressed.

I gave it one more look before hitting the publish button and I realized that there isn’t even a “Logout” button available unless I deleted the Oauth connection between Twitter and cleared my browser’s cache. That isn’t “distraction-free” – that’s just annoyingly unavailable.

Here was my experience in screenshots as well for those that have yet to gain entry: 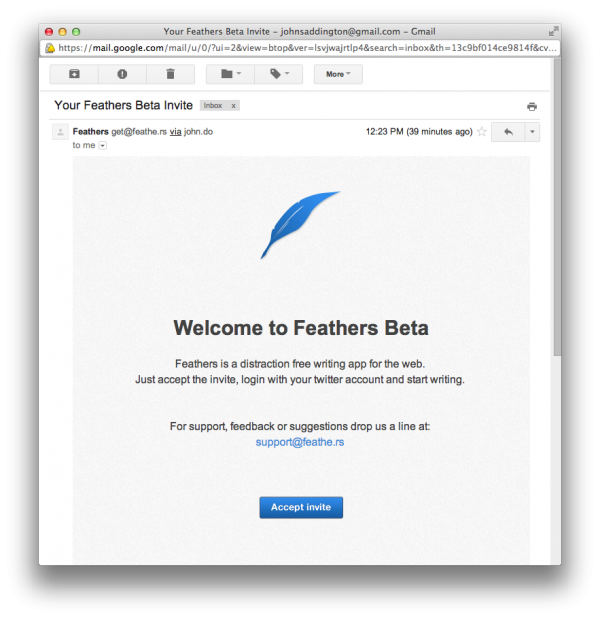 Got the invite. Yay. Was so stoked! 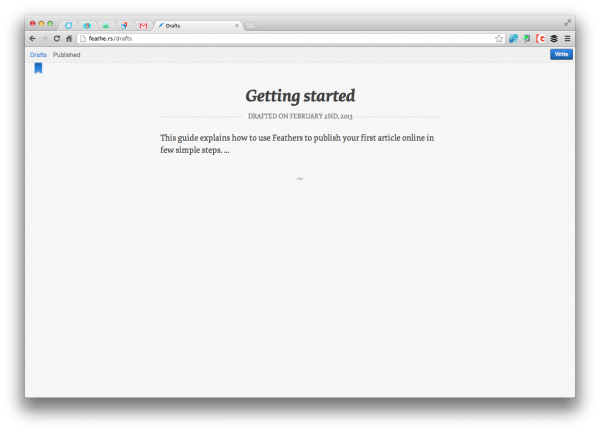 After connecting via Twitter’s OAuth I was greeted with this above screen. I started clicking around and realized that editing the blog post “live” was the interface and user experience. 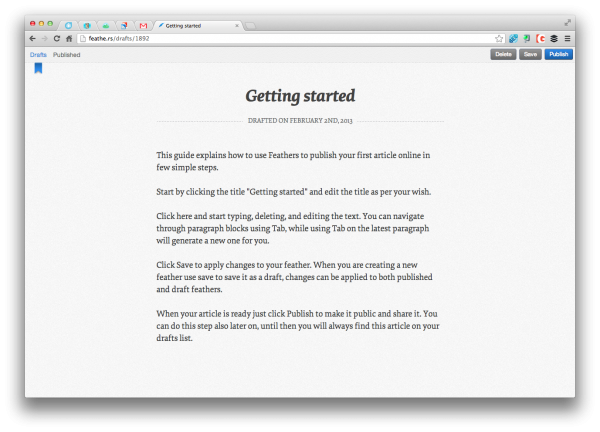 I first edited the title. 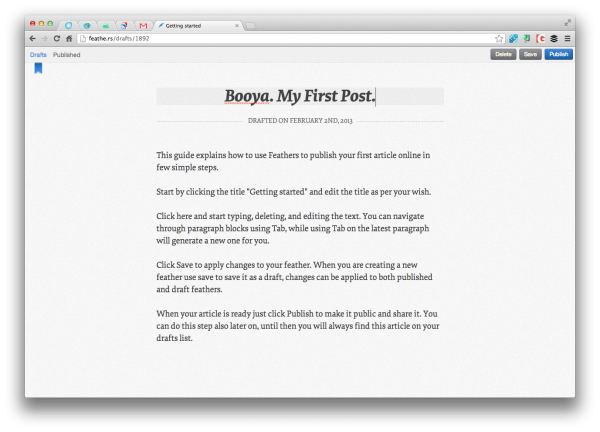 And then added some text.

What’s interesting is that I can’t CMD-A everything to delete or start over. There are “blocks” which each sentence is captured in like in their own divs or something. How annoying. 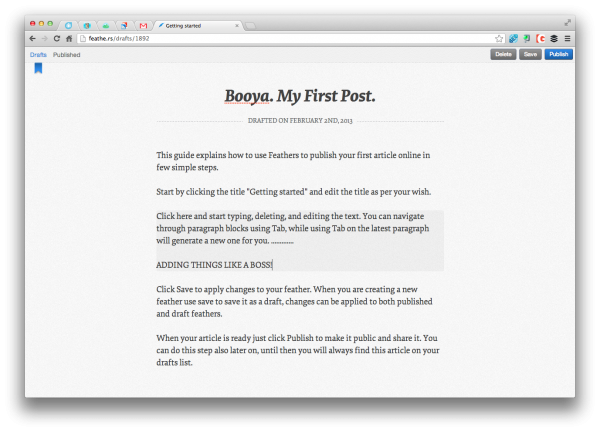 “Saving” it is quick and easy with a nice “check mark” in the center. Ok. Got it. 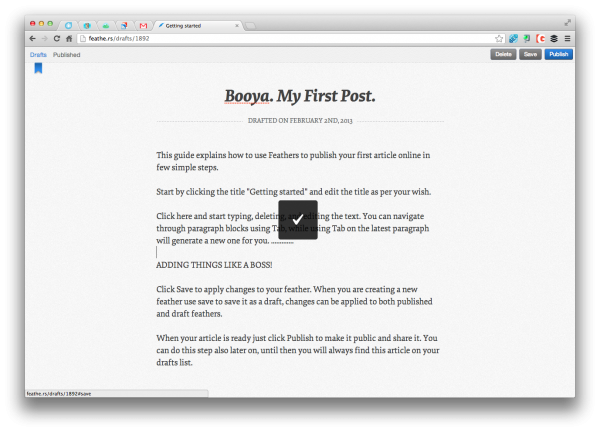 I then manually deleted everything to create my own unique blog post. 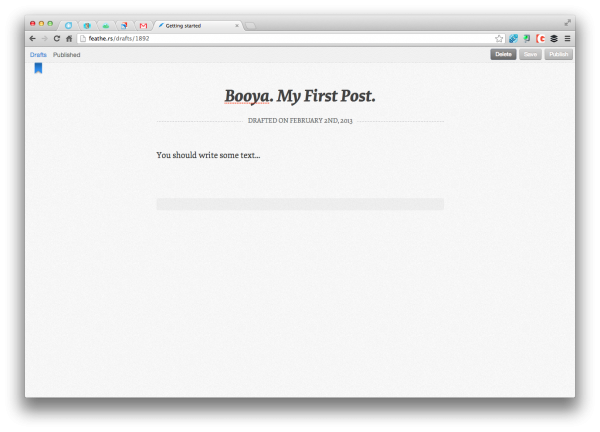 Trying to add images or media? Nope. Nowhere to be found. Trying to add a link? Nice try. The link does change color but it doesn’t actually link to anything. 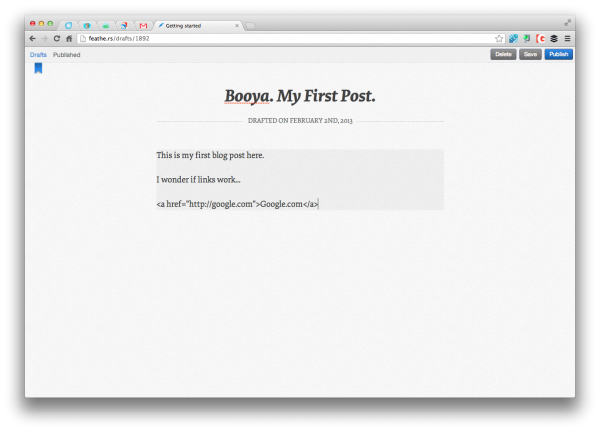 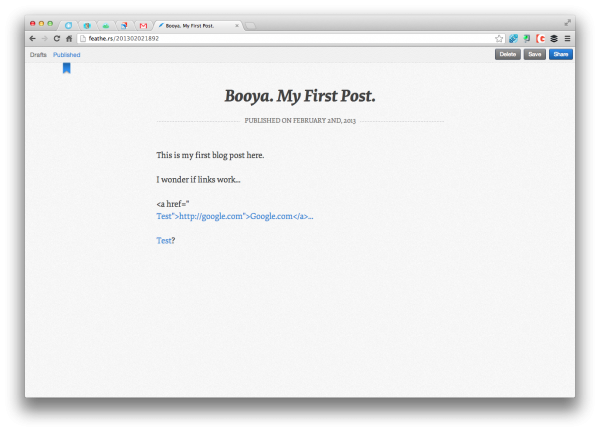 So I tried the link itself: 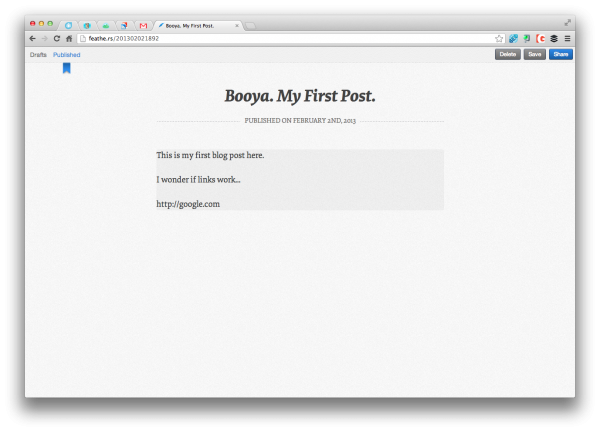 Ok. That worked, but it’s not clickable. 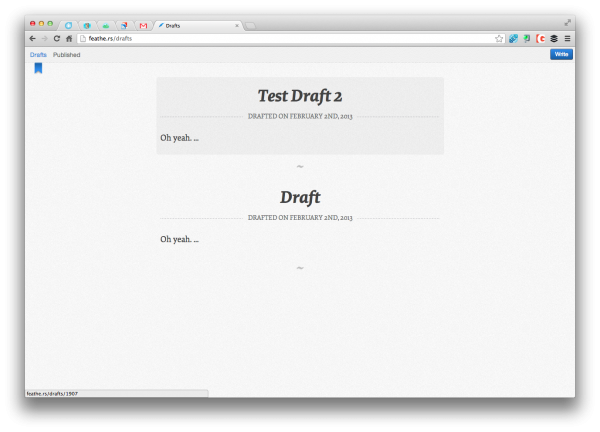 And after that I tried a few drafts and I was done. That was it. The entire “experience” in less than 5 minutes. I can “publish” the post and then share it manually but that was a pain since I had to create my own tweet (no native sharing), add the title myself, and then walk through that process.

There’s no commenting (not that commenting is necessary for all blogs) and no sidebars or anything else. It’s like TextPad on the web except worse and vastly more limiting.

To say that I’m being incredibly judgmental is true – I’m severely disappointed and thought it was going to be much more built-out. On the flip-side I congratulate the team behind feathe.rs for actually building it and launching it. Well done. Shipping it is vastly more important than it never getting off your local drives.

But, there’s something to be said about creating a MVP that excites and that pleasures the consumer and user, making us beg for more. At this point you’ve lost me and I won’t be going back until something dramatic shifts.

I’m sure there’s a market for it – because all apps have a market. I just hope for their sake that the market is bigger I believe (currently) will sustain it.