As many of you know now Google Reader has hit the dead pool and will no longer be in service July 1st. I am sad and incredibly upset at this news, even though I had been expecting that the day would come, namely because it’s become an intimate part of my overall workflow.

So much so that when I heard that it was coming I started shaking in anger – the mere thought of having to transition from an application that I’ve used since 2007 and have religiously used every single day is more than I can bear.

I won’t spend anytime discussing my thoughts on Google’s move here because it wouldn’t be worth my time, but I am disappointed. Very disappointed.

Part of my job as an entrepreneur is to stay in the know, as best as I can, with new trends and technology. It’s simply for my amusement as well as a daily source of inspiration – it’s a part of my digital life and it’s like an arm has been cut off.

Much bigger is my responsibility to this growing news and editorial blog here at WP Daily – Google Reader has been an essential part. In fact, I couldn’t do my job without it.

One of the biggest reasons I’m so anxious about the change is because the application works so well with the other uncompromisable application that I use daily – email. I just yesterday wrote about my simple workflow.

It works so well from one simple functional reason: Shortcut keys. I’m so fast when it comes to my email via shortcuts that it’s awesome. I can work through emails without every touching my touchpad or a mouse. It’s almost blinding. I love the challenge and finesse it takes to make shortcuts work – most programmers do this instinctively as well.

Google Reader shared these shortcuts – the same keys for very similar or exactly the same function. This way I didn’t have to switch my brain or calibrate my motor functions to “just work” because it just did.

Now, I have to find another application that not only has the fluidity of Google Reader and my long-standing workflow but also has robust shortcuts. The order was tall, but I think I found a decent solution to tide me over.

Feedly might be my temporary savior. It not only has Google Reader synchronization (and import) but it has shortcut keys that mirror Google Reader.

Signing up was easy and they have multiple options for use: 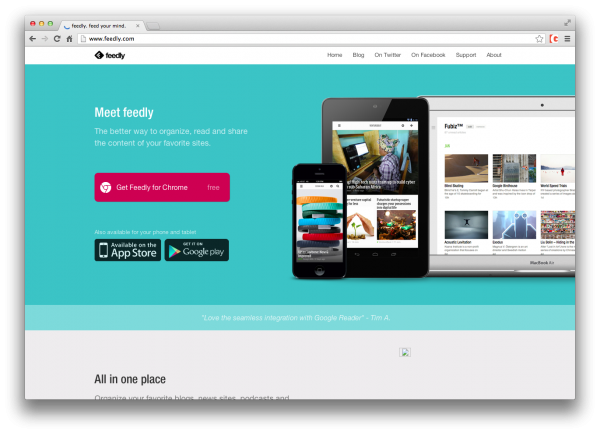 You can use it with a number of different browsers built right-in. 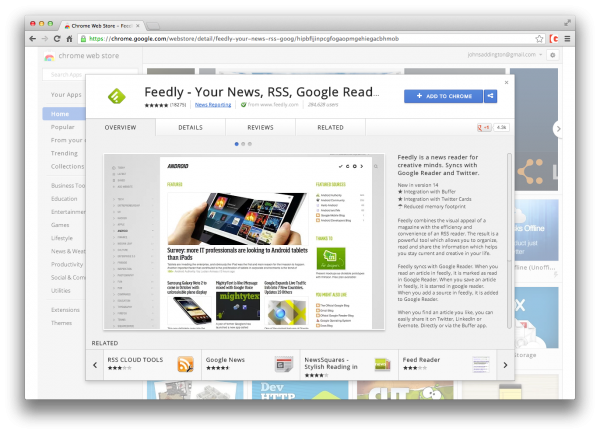 As you can see, I’m using Google Chrome and adding it was simple – a few clicks.

And then I could connect it quickly to Google Reader: 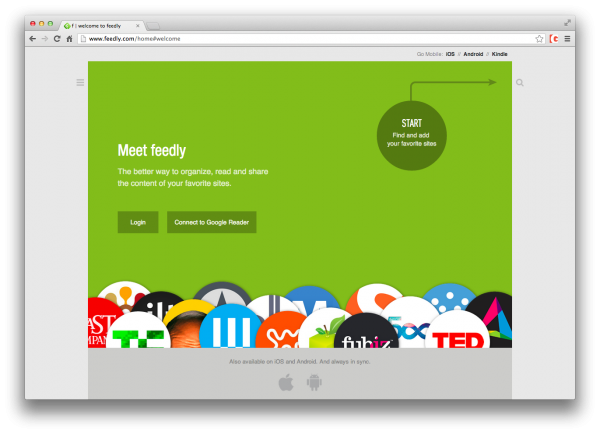 Choosing the right account and then moving forward toward syncing: 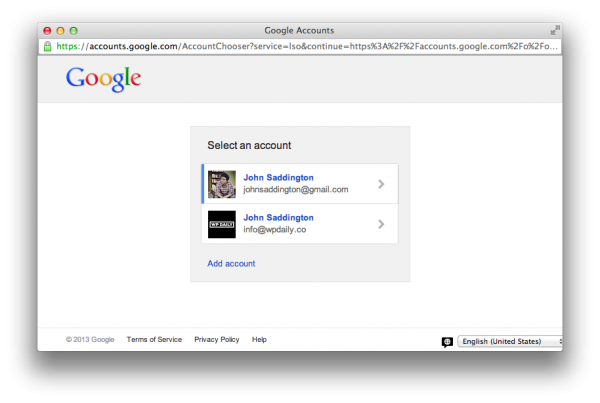 Syncing took some time and the service is slow as many people are moving over I’m sure: 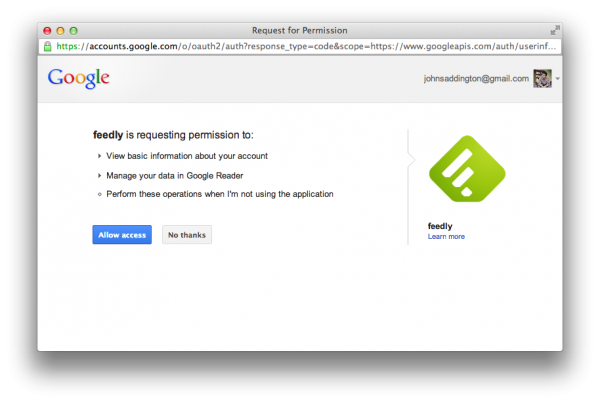 And then we’re in.

Then you go about as you normally would. The shortcuts, this is where it’s at:

The # of shortcuts aren’t as great and so I’ll have to cut a few things out in my existing workflow, which I’m sad about, but that’s fine for now. I just need to move on emotionally and I’ll get over it in time.

For now Feedly, you have my undying thanks for tiding me over. Please, don’t be stupid and sunset your project, at least while I’m trying it out.