The dust has cleared in more than a few ways since the GPL debate became a big discussion point in the last few months and I believe everyone is breathing a little easier knowing that some of the major issues have been resolved.

Or, at the very least, things are moving back to a point of equilibrium among the larger parties involved. The active and passionate discussion will continue to circle over our heads since we’ll never be completely clear of it as long as WordPress continues to be licensed under the GPL.

What’s fascinating is to note that these arguments and discussions aren’t exclusive just to WordPress – it’s happening wherever GPL is being used to license active open source applications. It just so happens that WordPress, being as ubiquitous as it is, gets a lot of attention because of it’s community size.

I was digging into some historical events to find comparison’s over the weekend and I was reminded of a number of civil wars, sotospeak, in some of other major communities in the past. For starters, I was reminded of one that was brought up during the peak days of our recent debate – Joomla, also a GPL project.

For those those that aren’t aware, Joomla was a fork of Mambo CMS back in 2005 – and was a very successful fork in a lot of ways. WordPress is similar in history being a fork of b2/cafelog. A sidenote, it’s neat to see successful forks become entire robust ecosystems in their own right.

But 2 years later the ecosystem had “gotten out of hand” and proprietary forms of plugins and features had risen as commercially enterprising individuals began building entire businesses off of Joomla – in 2007 the Joomla project leader, Louis Landry decided that enough was enough.

They instituted a “voluntary compliance” with the GPL mentioning that the exceptions to the rule were wrong and that they were sorry they had allowed those exceptions to thrive in the growing community. The non-profit trademark holder behind Joomla, Open Source Matters, was the source of this crackdown. 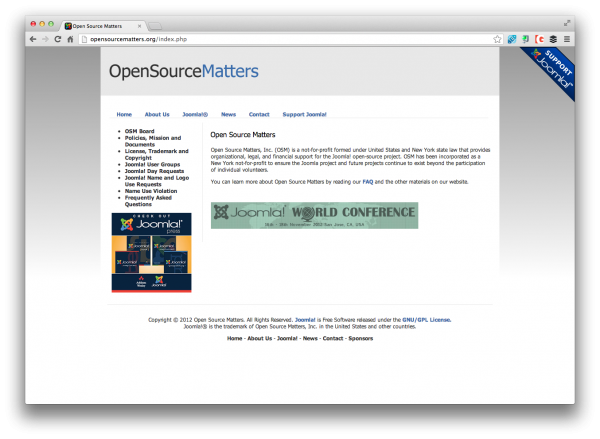 Surprise, surprise – parts of the community threw a major fit, citing that literal millions of dollars had been invested into some of these extensions and systems and that it wasn’t fair or right to force compliance. Louis and the rest of the team fought back citing that a return to compliance was essential to protect the rights and freedoms of the GPL.

Again, all of this may sound strangely familiar with the GPL discussions around WordPress, right? You’ve got a leader (Louis Landry / Matt Mullenweg), a the non-profit trademark holder (Open Source Matters / The WordPress Foundation), requesting compliance of the GPL (Joomla vs 3rd Party Extension/Developers and TWF vs Envato).

The reason I bring this up is two-fold, the first being the interesting parallels with the WordPress GPL discussion and another major open source CMS. One could easily argue that any application licensed under GPL and many other licenses will have some form of civil war at one point or another as they grow into prominence.

The second reason is the fact that lots of Joomla developers, service providers and users are equally (or secondarily) invested in WordPress – a lot of them lurk here on WP Daily (and we don’t mind!).

But back to the first point – you see, at the time, the issues surrounding the GPL and Joomla’s battle were a bit more clear in comparison to the one’s around WordPress. The governing body, OSM, didn’t really try to assert complete GPL compliance for templates and theming, just extensions and plugins. So in comparison, there has never really been an Envato-like battle in the Joomla community. That’s a difference that must be noted clearly. 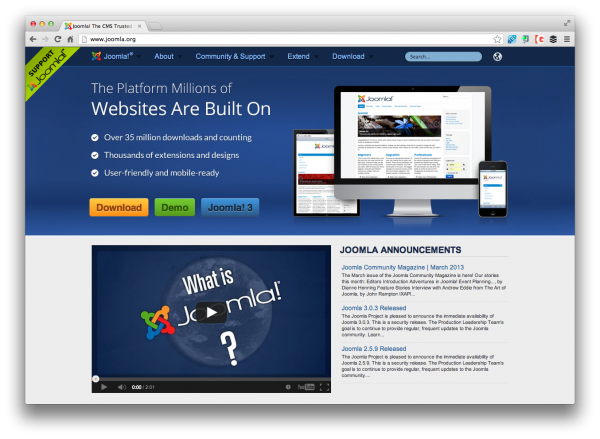 The big pain-point in the Joomla battle was how quickly and how strictly trademark controls were asserted and how punitive they were (and sometimes unevenly asserted) by the OSM. In other words, it appeared that some extension creators were pressured unevenly in light of the move towards compliance.

They reacted in turn, forming a union at one point, forking the codebase again, and forking it again, and again, and again. There hasn’t been really any real effect of this multi-forking response, but it was, at the time, a very big deal.

What happened though is something to note very carefully by our community – you see, the ecosystem that was created around Joomla is that eventually there was so much commercialization of the core application that very little ended up getting back into core itself. Joomla, as we know it today, suffered as a result and has lost significant marketshare.

The core became obsolete while people and companies profited. Larger and larger extensions and platforms and application layers were created to provide “additional value” on a sinking ship of an ecosystem and core appliation. Libraries were created, from scratch, to complement core which increased complexity and division, furthering the distance between core and sustainability.

Money was being made but none of it every “returned” to the Joomla mothership and we know what happened as a long-term result and outcause. Now, I’m not suggesting that the recent Envato debacle will end up following a similar path, especially with the poll results showcasing an interest in GPL offering as a license (whew…?!) but it does give us cause to pause and think about what our community means and the value that’s created and given back to the core. 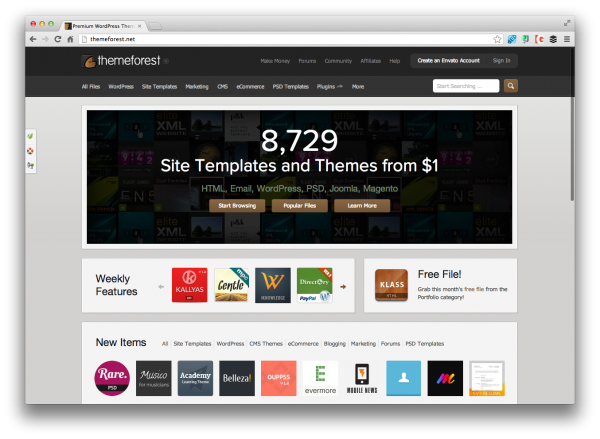 An oft-repeated criticism of Envato and the ThemeForest network is that of the quality of products released on the marketplace. Or rather, that the quality is often murky and/or possibly suspect. I cannot personally speak to the quality as I’m not a major purchaser of themes or products from the marketplace, but that’s the general feel from our community via comments, tweets, and blog posts.

Whether that’s right or wrong is another discussion perhaps. The point is that in an ecosystem where CCTs or advanced features and functionality is found to be clinically baked into the functions.php itself rather than portable and extensible plugins and the distance between core and product widen without control, then the entire system can suffer. Maybe not in the short-term, but definitely in the long-run.

If we’re to avoid the possible Joomla-like experience, then it behooves us to take note and to discuss wisely the consequences of our licensing choices and decisions so that we might not become obsolete and irrelevant. Sure, Joomla, as an organization and the OSM did what was best, at the time and with the information that they had. I don’t fault them nor do I judge the historical decisions made.

It would appear, in retrospect, that what they were trying to do was what Automattic has done – and they’ve succeeded in a few ways by creating some revenue streams that are tidy and make sense. Where they failed, perhaps, is making sure that the compliance ended up in direct contributions to core, both in man hours, commitment, and even financially.

Their alternative was death – and Joomla 1.6-1.7 really became the death knell. Automattic and Envato are different in that the former is not necessarily threatened by the latter but the latter is large enough to contribute and/or disrupt, in both healthy and considerably unhealthy ways. I don’t believe the intent for evil exists in either party – far from it, but without controls, quality assessment of the products that are created and released in such a significant marketplace, the community in time will pay the dues.

All of this now has played out well and people have rejoiced in the fact that licensing options have expanded with Envato. There are still very active and passionate voices against how it was done and they will always be with us, keeping us honest and making us good men (and women) as we engage ethically with valid and positive (although difficult) discourse.

I hope that the conversations will continue in earnest and that we all remember where we came from – the sources of our inspiration were free and free they should remain –  always, for us and for posterity so that others may benefit from the great work that was done many, many years ago.

In thanksgiving we work as a community so that the greater good of our future will continue to thrive. If we can learn that from Joomla’s civil war then we will far outdistance the possibility of demise and disfunction to our very own disgrace.