I love it when passionate people dedicate their time to pursue projects based out of their passions, especially around blogging and online publishing.

Jason Schuller is one of those guys who has been ‘around the block,’ sotospeak, in terms of the WordPress ecosystem and has seen some of the changes that WordPress has undergone over the past few years.

In fact, he hasn’t always liked where it’s all been going, so much so that he’s decided to take a step back and reassess where exactly he fits (and his perspective) in the growing marketplace of digital publishing:

ne of the reasons I left my day job was so that I could create and work on things I was actually passionate about. The WordPress website publishing platform allowed me to do that in the form of WordPress themes for around the first 3 years (starting in 2008), but not so much in recent years.

Minimalism and simplicity have always been at the core of anything I create, but WordPress has evolved into something much more complex and is no longer conducive to those values as I’ve written about…

With that in mind, one of my primary goals this year was to stop complaining about my personal issues with existing website solutions and start creating new solutions either on my own or by collaborating with other like-minded people.

And so he has. He had teased the coming project a while ago and now he’s got the fruit to show for his passion and work – it’s called Dropplets: Simple Markdown Blogging:

Introducing Dropplets, a fresh platform dedicated to making blogging simple again. There’s no database or confusing admins to worry about. Install in seconds, compose in markdown, then drag and drop to publish. 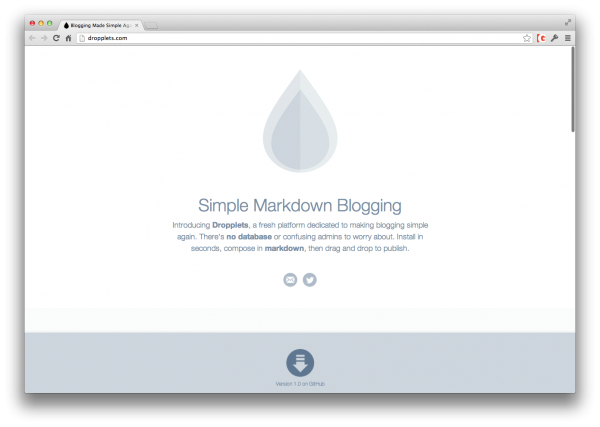 It’s as simple as it gets, very much like these other minimalist blogging apps that we’ve covered previously and although it’s not altogether different than some of these the reason I’d trust Jason’s product is simply because I trust Jason’s perspective, especially in light of his experience with WordPress.

So much so that I booted it up last night and tried it for myself. Yup, installation was easy. I was up in seconds, just like he said. 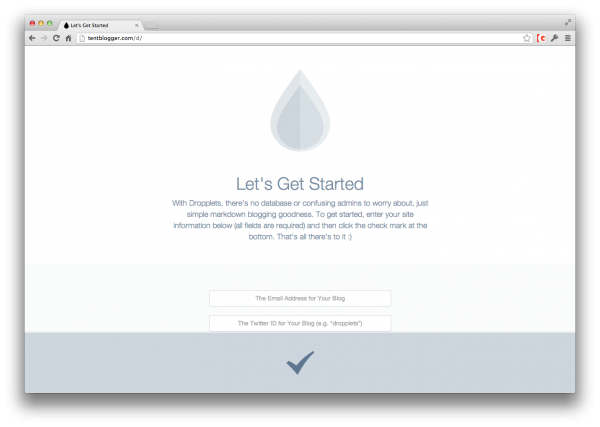 Playing around with it some more I uploaded my first blog post and was done with experimenting – I was publishing. Whoot!

Check it out and read more of his thoughts on where it’s headed – I think Jason may have something here but I’m not quite sure yet what, but I’ll be keeping tabs as things progress.

Thanks for pushing the boundaries and actually doing something instead of just complaining – I think we can all learn from this type of attitude and convention.