Wow, that was quick.

In less than 12 hours the Ghost Kickstarter Project found itself fully funded. As of this very moment they are set to clear over 1,000 backers by the end the business day today and perhaps scale beyond £40,000, well beyond their £25,000 goal.

Overwhelmed by the volume of interest & support for @TryGhost. Fully funded in under 12 hours. Thanks so much to everyone who has backed us!

For those interested, £25,000 is roughly equivalent to $37,500 or so in US paper. With 28 days left to go this could easily become a six-figure type project and I know for a fact that John O’Nolan and team are celebrating big wins today and can rest easy for the rest of the Kickstarter campaign.

To be honest, this is probably one of the best things that the team has been blessed with since I know first-hand what it’s like to walk through a Kickstarter project and work my ass off to make the cut (it nearly killed me) – oh boy would I have loved for my project to be funded overnight! 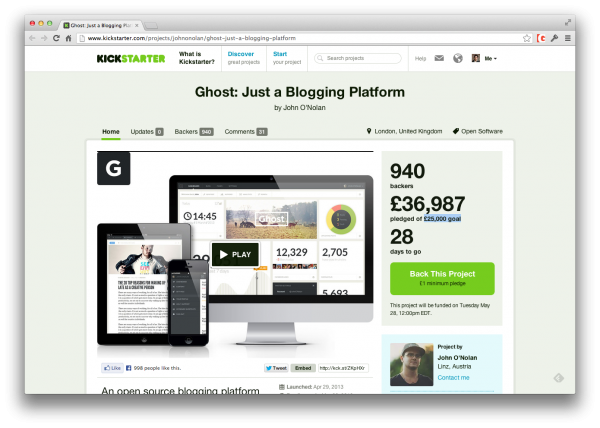 I salute the team and wish them the very best! Even though they are dubbing it “just a blogging platform” it is clearly going to be more than just another publishing system as it’s created somewhat of a movement of passionate bloggers and WordPressers alike who are excited to see another powerful (and simple) offering on the table.

I know that we here at WP Daily have a keen interest in seeing this be a success because we think that adding another “competitor” to the mix can only bring about even more innovation for WordPress core.

I don’t see anything wrong with that and am very excited about the potential, as many others obviously share that sentiment. Even institutions such as WooThemes are getting in on the action – Adii Pienaar shared that they are ready to partner and build themes for Ghost:

WooThemes wanted to support Ghost and see it become a reality, because we want our users to experience the same awesomeness. As such, we’ll be working closely with the Ghost team to get some of our themes Ghost-ready.

Love it and I can’t freakin’ wait!

Some screens from the Kickstarter project to continue to get you excited!