About a month ago, I asked for feedback on a project I was working on. I originally began to build a WordPress code library after I had been using Dan Ciederholm’s Pears theme which encourages modular, object oriented, front-end development.

I began to work on something that would do the same for WordPress patterns. But I had a bit of trouble figuring out exactly what that was.

Thanks to your incredible feedback and a couple of supporters pushing me along, I have officially finished Version 1.0 of Looplet.

So What is It?

After speaking with some of you, I was able to get a much better sense of what Looplet was, and what it could be. I found that it worked best as an educational tools for developers new to WordPress, or seasoned developers who wished to teach others the ropes.

It still functions fairly well as simply a pattern library, but I added a few features to make it work just a little better out of the box, and be useful to a larger group of people.

The first thing I tackled was the companion plugin to Looplet. This plugin is responsible for loading in dummy content into the custom post type “Looplet” so that custom loops can be created right away. Here, I added categories, tags, and post thumbnails to each post, so that customized loops could be more complex and robust.

The next step was to enhance the experience of actually creating patterns. First, I added new parameters to the customizable loop, which now has full support for taxonomies and meta tags such as custom fields.

Second, I added inline documentation to each step, so that it was easier for new developers to get started. Now, it’s as simple as folowing the instructions for each parameter in the custom meta box at the bottom of each page. 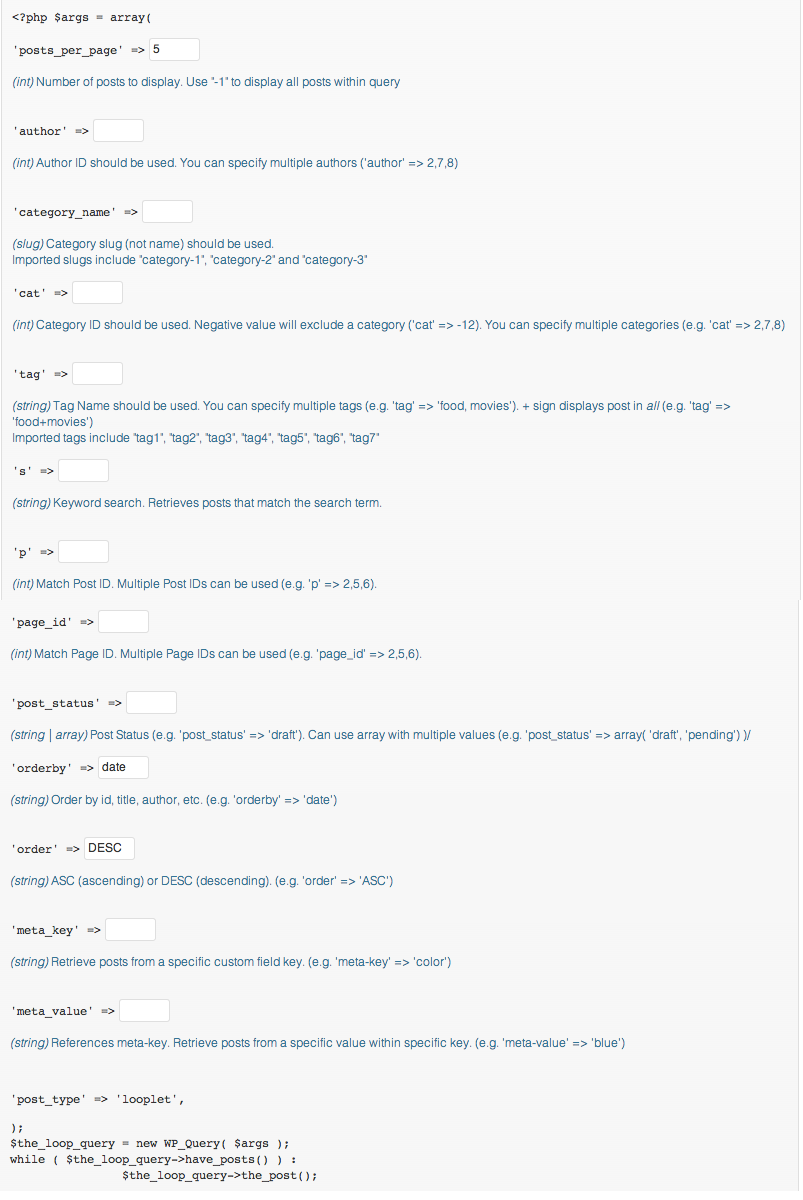 Where is it Going?

I don’t know yet. I’d like to add a few things, such as custom taxonomies and validated/santized PHP, and I’m sure the code could use some cleaning up, but I’d like to get a sense of how people use it first.

Of course, I would love to hear more feedback, so leave your thoughts in the comments or catch me on Twitter, whichever you prefer.

Thanks for all your support, I hope I’ve created something that can help a few people in this community.