The crowd funding world is not slowing down anytime soon and it’s one of the more interesting concepts that’s really taken off in the last few years that hasn’t even reached critical mass. Thinks like Kickstarter and Indiegogo are taking off and so naturally WordPress-related themes have started showing up as well.

Although I’ve shared some thoughts on the general industry as a whole there’s really no stopping this train as it’s definitely left the station for good.

Well, one of the better and more well-known theme companies that had a very neat offering has not only gone through a rebranding process but also launched a neat implementation that has a bit of a different angle to it, one that I can appreciate and think as a solid start. 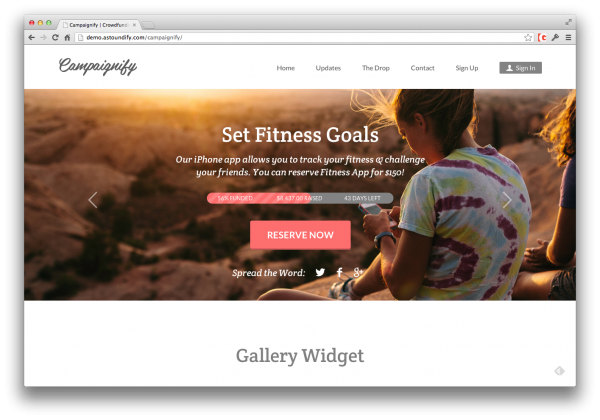 Adam Pickering, of the new Astoundify (was once AppThemer – they changed the name because there was some confusiong with another theme company called AppThemes) has had some great success with Fundify, which they released in late march. He told me that they’ve already seen a great start with over 500 sales so far but that not everyone needs to have a “Kickstarter” site for every niche, something that I can appreciate:

So they decided to do something about it and engage the individual and their need more directly by creating a theme that could fund one project instead of a catalogue of them. That’s where Campaignify comes in.

Here are a few examples:

I like this implementation and I think there are a lot of advantages of doing it this way, especially with keeping the focus on your project without distraction of others. You also get all that native traffic to your site as well without giving it to another site like Kickstarter.

Sure, you won’t get the network effect of being part of the larger community of one of those sites but perhaps you won’t need that attention, depending on what you’re trying to raise.

Take a look and let me know what you think. You can purchase it directly from Themeforest here as well.