Jeff Chandler (Jeffro) has opened the doors back wide open with WPTavern and the patronage is quickly coming back to where the drink is good.

It’s been a pleasure to get to know Jeff personally through digital communication over the years and we here at WP Daily are fans – the way we see it is quite simple: The more the merrier! Remember, our manifesto and mission is collaboration over competition (although we enjoy a bit of healthy competition just like the next guy).

So I reached out to Jeff and asked if he could spare a few minutes sharing what’s going on and where he’s been (as well as where he’s headed) – he obliged and shines some light on some things that even I wasn’t aware of.

I’m doing pretty good thanks to the new job.

2. Despite How Famous You Really Are, There Are Still Many People Who Don’t Know Who Jeff Chandler Is. Give Them the Deets!

Well, when I attend WordCamps, there are actually very few people that have ever heard of me, let alone WPTavern. But when I meet people, I tell them I operate a large WordPress enthusiast community website called WPTavern.

I’ve been the Tavern Keeper since 2009 and I currently live in Northern Ohio. 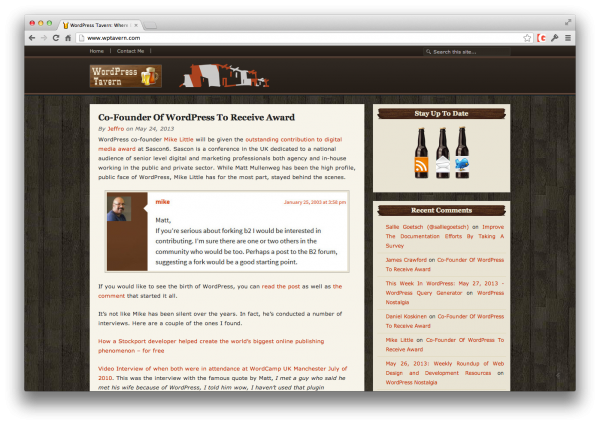 3. How Did You Get Started in WordPress? What Was Your First Experience with It?

June, 2007 was the first time I used WordPress. I decided to start a website that would cover and review all of the different Web 2.0 services that were springing up. I purchased everything I needed during the month of May, 2007. This included a domain, hosting, and a few other tidbits.

I had a general idea as to what I wanted to accomplish with the site and the way I wanted it to look, but I had no idea on where to begin. WordPress was suggested to me numerous times so that’s what I did. Initially, I couldn’t for the life of me, figure out the templating system within WordPress.

I gave up and decided to use Joomla, as I had a good amount of experience with the CMS. I quickly realized, Joomla was too much of what I needed. I ended up giving WordPress a second try and since then, I have never looked back.

4. How Did WP Tavern Get Started and How Have You Seen WP Tavern Influence the WordPress Community? 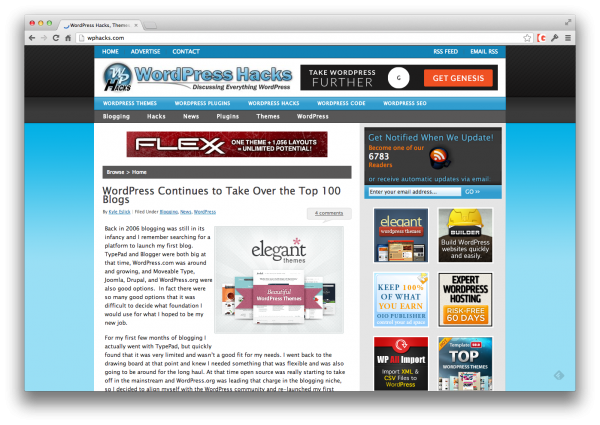 Two months later as I was working my late night shift at the grocery store, an idea popped into my head. The idea was to create my own WordPress centric site which I could use to foster a community while at the same time, write about the software and community I love. I figured WPTavern was a great name as Taverns seem to have a sense of community around them.

Also, Taverns in my mind are places to hang out, have friendly discussions with a warm and inviting atmosphere. I wanted to replicate those feelings through WPTavern.com and that remains one of my goals for the site.

I contacted Kyle regarding the domains in December of 2008 and found out they were still available. I was shocked to be honest considering how good the domain name sounds. So in late December, I published a post on my personal blog and laid out my ideas to see what my audience had to say.

They unanimously told me to GO FOR IT. And so, the Tavern was built.

Within the past 4-5 years, there have been times when WPTavern was at the forefront of the WordPress communities minds, especially during GPL debates and other controversial subjects. WPTavern has been influential in some of the smaller features in WordPress.

A good example is the ability to specify the number of comments, or items to be displayed within the back-end of WordPress. What I’m most proud of is seeing people like Bradley Potter, Brad Williams, and Ronald Huereca, Ptah Dunbar and others go on to have a successful WordPress career.

These folks were some of the first patrons of WPTavern.com and as far as I know, either didn’t know very much about WordPress or were just starting to get their feet wet with development.

Thanks to WPTavern, they had a place to hang out, talk about various topics, gather knowledge from some of the smartest people in the community and I think with all those factors combined, WPTavern helped guide them and others to a path of success.

5. Matt Mullenweg Recently Shared His Purchase of WP Tavern and Hiring You to Manage and Be the Official Caretaker – How’s It Like Being in Business with One of the Founders of WordPress?

I’ve been under Matt’s wings since June of 2011. This was around the time I announced that I would be selling everything off in order to pay a few bills and move one.

I initially wanted to sell everything for about $7,000.00 This figure would enable me to take care of a few things but I didn’t put any serious thought into the price. I almost pulled the trigger on a buyer but at the last minute, I got in touch with Matt.

I told him the situation and he felt that I had substantially cut myself short on the price and didn’t value my work as much as I should. He gave me an offer I couldn’t refuse and there was no other person that would have been a better buyer.

I’m still shocked when I tell people Matt is my boss but I’m very proud to say those words. I’ve been asked if my business relationship with Matt provides me special access to certain things or insider information. The answer is no. I have to work just as hard as anyone else to obtain information for posts.

The roadmap as I know it is to give the Tavern a new modern look, add social elements like bbPress and BuddyPress, bring back the WordPress Weekly podcast in some form or another, and last but not least, continue to showcase what the community is doing with and around WordPress.

7. What Are Some Pieces of Advice For Us and Others Who Are Interested In Launching Blogs Covering WordPress News?

My advice to anyone wanting to start a WordPress news centric website, especially if you think it’s going to make you some money is to stop immediately. Focus your efforts on where the real cash is: Commercial plugins, themes, and services.

A news centric website takes so much time and energy to maintain and keep fresh, it’s not worth it in the long run unless you have a company backing you and providing you a steady stream of cash that pays the bills and puts food on the table at the same time.