I woke this morning to more news that yet another known player in our relatively-large ecosystem and space may actually be getting into the WordPress Managed Hosting space.

Tung Do, of DevPress, has been known to shake things up in the past with such things like a re-imagination of the WordPress dashboard, shared yesterday that he’s interested in getting into the hosting space and “revolutionize” experience:

To create a more enjoyable and feature-packed service than WordPress.com. I’m not gunning for WP.com, but it’s the easiest way to explain what I’m going to build. And instead of re-inventing the wheel, I’ll use WP.com’s business model — freemium — as well.

His tactical details are fairly-well outlined and it appears he’s done at least some cursory research on what it might take as he lists out his plan for a free platform (with paid upgrades) that could include anything from advanced media management (podcasts, videos) to eCommerce and subscription options. 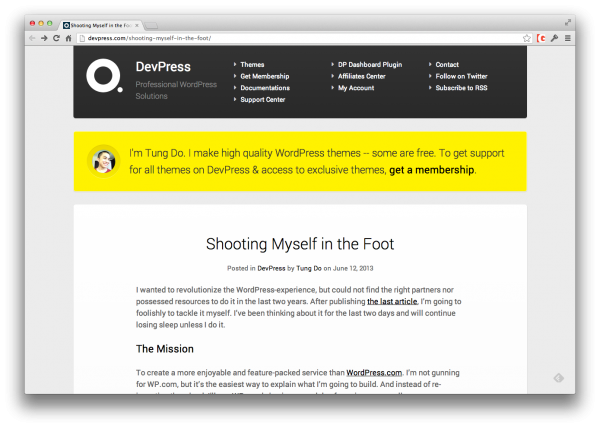 And like another blogger mentioned, I don’t want to “belittle” anyone’s efforts (and we know a thing or two about that) and it is certainly an uphill battle. So much, much love on it. You can do it…

Actually, scratch that, it’s close to suicide. Has Tung Do bitten off a bit more than he can chew? Has he “shot himself in the foot” by sharing his intentions publicly? I’d say a flat-out “Yes” (and a bag of chips). Heck, at least he shares with us that there will be a refund policy if the project goes belly-up, although that doesn’t stir incredible amounts of confidence for me, at least personally.

Look, I really don’t know much about WordPress managed hosting. I’m not even sure I really care that much for it insofar as creating a new business out of it. You may already be aware that our team here at WP Daily and 8BIT has been aggressively stress-testing our own hosting solution called eve and it’s been a bitch to figure out.

Many of the guys that have gotten it up and afloat (ZippyKid, Page.ly, WP Engine, and others) have reached out to us personally asking our intention and what are plans are – we love those guys and they’ve been crazy-helpful in filling gaps of knowledge and sharing their experiences with building a sustainable business.

But if nothing else they’ve shared (besides opening a dialogue about white label scenarios), either implicitly or explicitly, that WordPress managed hosting is “tough shit” when it comes to doing it right and if you want to “innovate” and “revolutionize” the industry then you probably should pack your bags since it’s hard enough to just make what’s “acceptable” and “expected” financially work for starters. Perhaps later you can do those neat tricks but make the business float instead of sink first!

And it’s tough for good reason. You’re walking into the business of managing other people’s business – their very livelihood. You are promising hard working individuals and businesses that you care as much about their business, their families, their mortgages as much as they do. You may not say that but they feel it and you feel it when sites go down.

Am I (is my team) ready for that level of commitment? Do we want to jump in that bloody masochistic pool willingly? To be honest, I’m not even sure anymore. I’ve learned way too much than I had originally hoped to learn in the past few months as we’ve experimented with it ourselves and I’ve lost more sleep in just our 3 (or are we on #4…?!) prototypes that we’ve built.

At the end of the day I wish Tung the very best and I hope he’s got all his chips together, the right team, and the right financial model (pre-launch, post-launch) to make it right. It takes time, resources, and for many even some venture capital to get it up and running to a place where you’re allowed to sleep a few hours a night.

Don’t make it just words my friend. Rhetoric sounds so effin’ cool on a blog. Prove me wrong, go do it, and you’ll be one of very few. I like to be wrong.