The biggest news in the eCommerce space isn’t Shopify with their v2 being released yesterday but rather iThemes and their new entry in the growing shopping space with Exchange.

And they were greeted with many votes of confidence and praise, even from existing competitors. As one person mentioned, this is what’s so great about the WordPress community because we can pat each other on the back despite our commercial interests:

Competitors who treat each other with respect because they understand that the culture of the community they’re in doesn’t do competition the way other communities do it.

iThemes on-going challenges will be great to great a select and competitive product but they’ve got one thing going for them – an existing and passionate user-base to build off of. 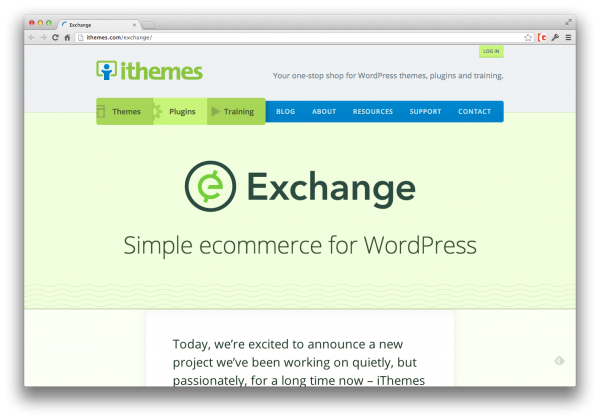 Their goal for their version is to:

It’s currently open for beta invites and they are looking for people who currently run an eCommerce site or build sites for eCommerce customers. Sign up here.

I’m excited to see Cory and his team get involved in this growing marketplace and I hope that they pull it off just right to complement, not just compete, with other offerings like WooCommerce.

Otherwise it’ll just be another bandwaggoner taking advantage of a burgeoning market with no perspective or unique flavor. I’m not sure iThemes wants to do that and we don’t want to see that either. Rock it out.