Just in time too.

NetNewsWire, a native OS X RSS Reader just released their Beta for version 4 and it’s not too shabby. You can download it and import your Google Reader feeds in just a matter of seconds (literally) and be relieved that not is all lost.

I tried it out last night and although it won’t get me to switch from Feedly at the present moment I may slowly begin to try it on for size at it comes out into a full release. 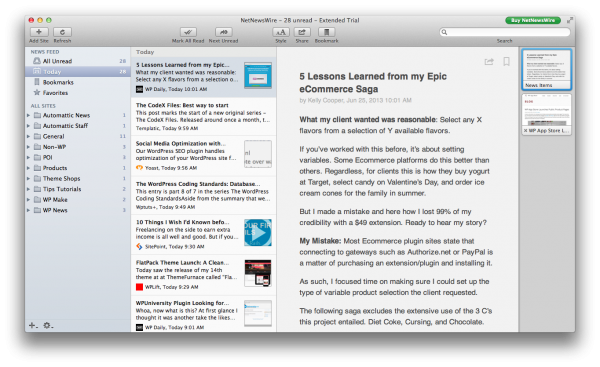 Fast (because it’s a native app, yay!), sleek, and simple it may be the solution you’ve been waiting for, and they’ve been thinking about that since day #1:

There’s a lot going on with RSS and news readers right now, but our primary focus is always going to be a killer user experience. The goal of this release is to ensure that the core reading experience is top notch.

Simple options and that’s about it. Import and you’re good to go:

Take a look and let us know what you think. Will you be moving to this you think?