How many presentation slides have you built in your life?

Gasp, too many for me. When I used to work for the enterprise and even a large non-profit organization, I was building slide decks every week it seemed. For the most part most of them royally sucked. I broke every design rule imaginable and just did what most people do: Bullet point lists of content that bore people to tears.

Well, perhaps it’s time to go WordPress-on-it and thanks to Otto there’s a solution that might be a bit more appealing than that last presentation that you did last week:

Slides Presentation Theme is exactly what you think it is – a visual presentation of content that looks like a preso deck that you’ve created in the past except that it’s powered by WordPress; go figure, I know.

The best way to experience the theme though is to walk through an existing one he’s created for a recent WordCamp: 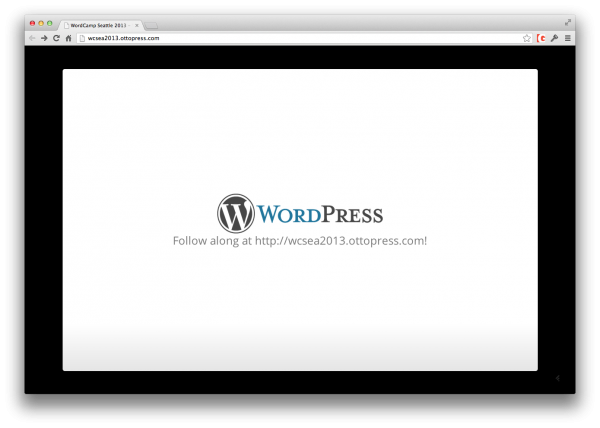 Use your arrow keys to navigate left and right.

One big caveat though (and a big one I might add) is the fact that this thing takes over everything in the install – so watch out:

Now, for those people wanting to use this, note that it more or less takes over the whole WordPress install. The Posts menu is actually removed. So is Comments, for now, because I can’t think of a reasonably good way to show or allow comments on presentations yet. Might add them back later.

Since this takes over the whole WordPress install, the best way I can think to use it is on a multi-site install. I run multi-site myself, so creating a new subdomain site takes about 30 seconds. Just create a new site, give it a new domain mapping, and voila, done.

So, don’t just throw this on an active site and think you’ll be fine – you won’t want to do that!

Thanks Otto for the neat implementation – I imagine with a bit of work you could abstract it out as a standalone theme itself (if you wanted) and even could create something much more than just a theme (again, if you or anyone else wanted).

Of course, it’s a work-in-progress so don’t expect the moon, at least not yet. Here’s the general run-down:

Sweetness. Will try locally this afternoon.