And that’s a good thing.

Sure, no one’s going to quit a new theme club or theme company within the first month or two but it can be very apparent very quick whether or not any traction is being created as this world can be scary, yo!

TeslaThemes, which announced their coming out April 17th is still here and continuing to release their themes as they had originally planned: One new theme a month. A simple strategy that’s been tested already a few times. 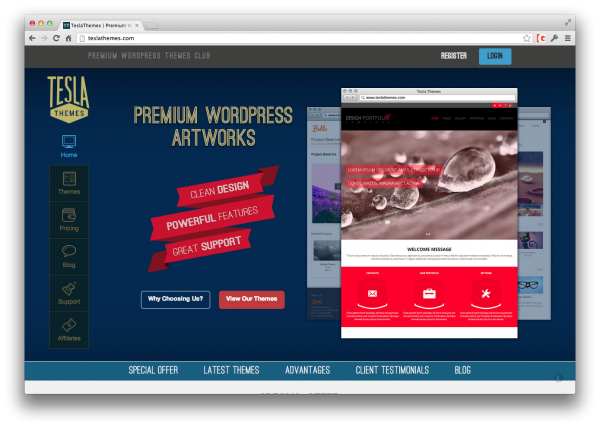 I think the best thing that TeslaThemes has going for it so far, besides some interesting themes (but nothing that cries OMG, THAT IS SO EPIC AND ORIGINAL!111111111!!!!!!!) is the name, because Nikola Tesla was such a serious badass and demands incredible respect.

Sure, they’ve got a framework (Tesla Framework) which doesn’t sound to distinct from other frameworks:

All our themes are powered by Tesla Framework, a powerful administration tool that comprises all our great features and allows you to easily customize the look and functionality of your theme, without advanced knowledge of programming. It gives you the possibility to customize and manage your theme settings from a dedicated area within your WordPress Admin.

I haven’t dug into it extensively but at some point perhaps I can get a preview copy (*hint hint*) and take a look myself.

The one thing I don’t get (and perhaps I missed it) is the fact that it’s not obvious who is behind the project and company. Who exactly is the person (or team) that’s running Tesla? I’d like to know more about their affiliations, their experience, and their involvement in the community at large (and historically) before I jump right in.

Isn’t it better when you know who you’re buying from instead of just seeing a faceless storefront? Perhaps I’ve missed it. Jeffro has an interview with the founder as well if you’d like a read there as well, but no name comes up in the entire interview – odd, right?