This is the most interesting news I’ve heard in a long time when it comes to blogging platforms, and it’s especially personally because Xanga is the first CMS-based and web-powered blogging system that I ever committed to for any serious amount of time.

When I first started blogging back in 2001 it was just uploading via FTP. Later that year I encountered Xanga and I was hooked as this was much easier that uploading individuals HTML files one by one. I was the first to sign up for their “lifetime” account and blogged my heart out for years on the service.

It was only a few years later that WordPress became a fixture in my life and I migrated over. But the impression that Xanga had created on my life was firm and set – I’m forever indebted to Xanga as a foundational part of my growing love (addiction) to blogging. 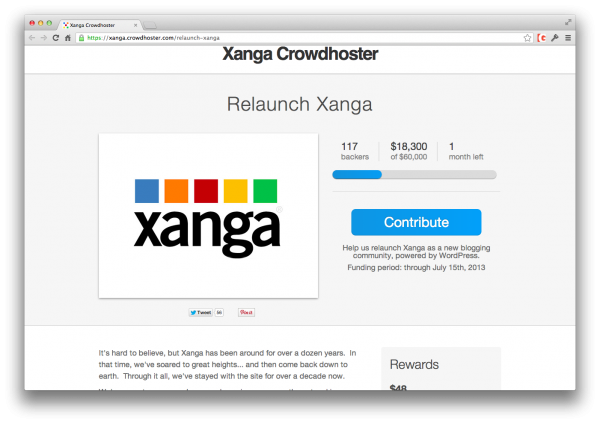 And now it seems that Xanga may move to WordPress as part of their future! Xanga, via Crowdhoster, another Kickstarter-like service, is looking to relaunch Xanga as a new blogging community, powered explicitly by WordPress.

It’s hard to believe, but Xanga has been around for over a dozen years.  In that time, we’ve soared to great heights… and then come back down to earth.  Through it all, we’ve stayed with the site for over a decade now.

We’re now at a crossroads, as our lease is up soon on the networking facility where we’ve been hosting our servers.  As the status quo is no longer possible, we’ve been working to figure out the best way for the Xanga community to move forward.

We’ve seen other sites go down different paths… some have sold their sites to the highest bidder, while others have doubled on their own platform.  The thing is, it’s really hard to grow a social site that has fallen from previous heights.  MySpace, Friendster, LiveJournal… lots of people have tried to resurrect these sites, and it has rarely, if ever, worked.

The option they’ve come up with is to move to WordPress, reboot the community, and get some fresh legs underneath them while saving tons of money in the process.

I’m very tempted to contribute, only because my heart has a soft spot for Xanga as well as the incredible win it would be for Xanga blogs to be ported to WordPress (there are a ton of them). My wife even has an old blog on there that would love some WP-powered attention.

Take a look at the Crowdhoster campaign and if you’ve got any extra coin consider contributing. What a sweet win it would be for everyone involved!