For those that are considering (or have been working with) Themeforest over these years then you’ll want to make sure you take notice of the update that they just released regarding the submissions guidelines and requirements for WordPress themes.

And this is not a small update – it’s a major one and they’ve given the community 8 weeks to come into compliance:

As this is a fairly major update, we don’t want to throw anyone in the deep end. For the next eight weeks we’ll be recommending, but not enforcing, that new and existing themes meet the standards outlined above. After that, these will become the standards for reviewing all new themes.

We will eventually be asking that existing themes also be updated to meet them, with a separate grace period to be advised at the time. Those changes should be small and gradual, and we’ll work with affected authors to assist them through the process. 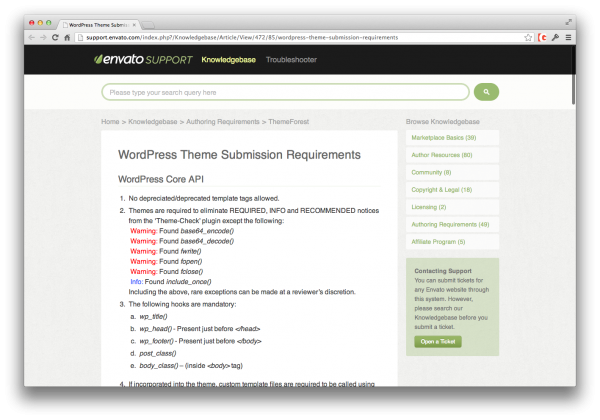 You are definitely going to want to review these guidelines here and make sure your stuff is up to snuff!

There have been a ton of responses already which you can read in the forum thread and some are happy (for good reason as the quality of themes is going to increase) and some are downright mad.

Will there be a revolt? Most likely not but it’s going to really change many peoples (and business’) roadmaps as they may have to spend every moment over the next 8 weeks rebuilding and refactoring their code so they can stay in compliance.

In the end this is a good thing and it’s a strategic move on behalf of not only the developers and designers but also the customers at large. I’m sure plenty of thought was given to the initiative and I know that the Envato team will be available to help everyone as they make the transition.