Well it seems that it wasn’t just a cute idea with no meat (pun intended) on the bones with this new podcast idea as they are launching later this month with a live broadcast at 10:00am EST with none other than John O’Nolan, the founder and creator of Ghost.

From their announcement to those that signed up for updates:

We wanted to launch the podcast with a bang, and that’s exactly what we’re going to do. John has agreed to come on and give us exclusive information about why Ghost is being made, how it will work, plus a bunch of other badass insider info.

We’ll Be Broadcasting Live @ WPBacon.com on July 23rd at 10am EST!

Since you signed up for our newsletter, you’re hearing this news before anyone else. Feel free to tweet, blog, and tell anyone who will listen about how much ass our first podcast is going to kick. We’ll be doing the same shortly. 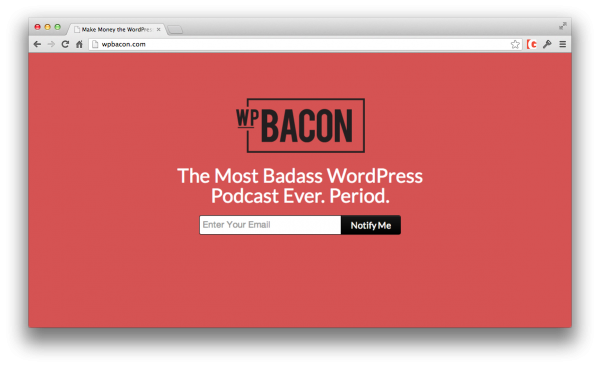 There’s still no sign of an actual homepage outside this landing page above but I’m sure we’ll see it very shortly. I hope it literally has bacon in the design – it wouldn’t be “badass” without it.