The first thing that I want to say is that I made a mistake when I decided not to bring my Cannon Rebel. Next time I’ll be sure to lug it along—even though it adds a little extra stress as far as fear of theft goes, and a little extra discomfort in the trains, planes and bicycle hopping process. But the iPhone just doesn’t do this trip justice…

That said, I would like to encourage any/all of the WCEU attendees to email Torque your photos from the trip. It would be nice to do a proper spread, and give all of you photographers a little love (and credit), too!

Where the Heck is Leiden? 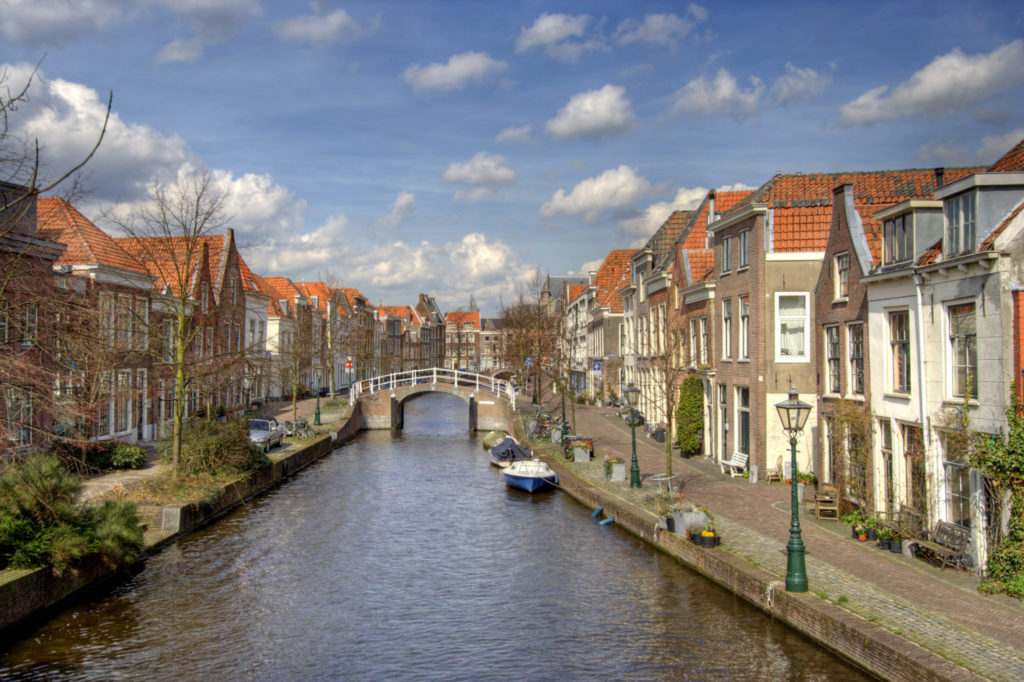 First of all, its pronounced Lie – den, not Lee – den. I’m not sure why this is so hard for Americans. I strongly believe that if you are going to be speaking in a foreign city, presumably to some of the people from that city, you should be sure to pronounce it right.

Leiden is a small city about 20 minutes south west of Amsterdam by train. It’s a college town with a population of about 120,000. Full of beautiful rivers, canals and parks, it has somewhat of a storybook feel. Quaint and safe—and full of history.

The event took place in the beautiful Stadsgehoorzaal Leiden, a concert venue where major acts like U2 have played. A large Neo-classical building that dates back to 1891, it’s grand and impressive, with European charm and a regal sensibility.

The main room is where the “Earn” and “Make” talks took place:

The other room, located by the coffee area upstairs,  is where the “Build” and “Learn” sections took place: 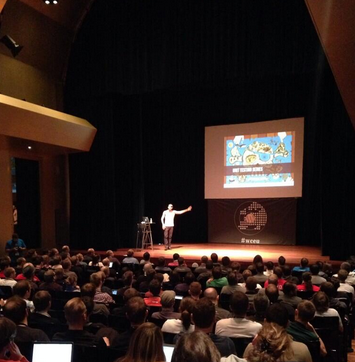 The venue was phenomenal. Majestic, even, complete with spiral staircases and purple velvet chairs.

The only complaints I heard about the venue were from some of the sponsors. A few people expressed concern that their booths were tucked away in a back room, not easily accessible to all attendees. Some people never even stepped foot in the sponsors’ room, much to the dismay of the sponsors.

The other issue was Wi-Fi. I, personally, couldn’t be online while attending the talks. This resulted in a delay for all of you readers, but it’s really not that big of a deal. If anything, it forced me to be present in the moment and really focus all of my attention on the speaker, which was nice.

What an amazing group of speakers. From the very first talk I saw in the main room, Behind the Scenes at Smashing Magazine by Vitaly Friedman, to the last one I attended upstairs, The Victory of the Commons by Joost de Valk, I was blown away by the passion, the content, and everything that I was able to learn in such a condensed amount of time. 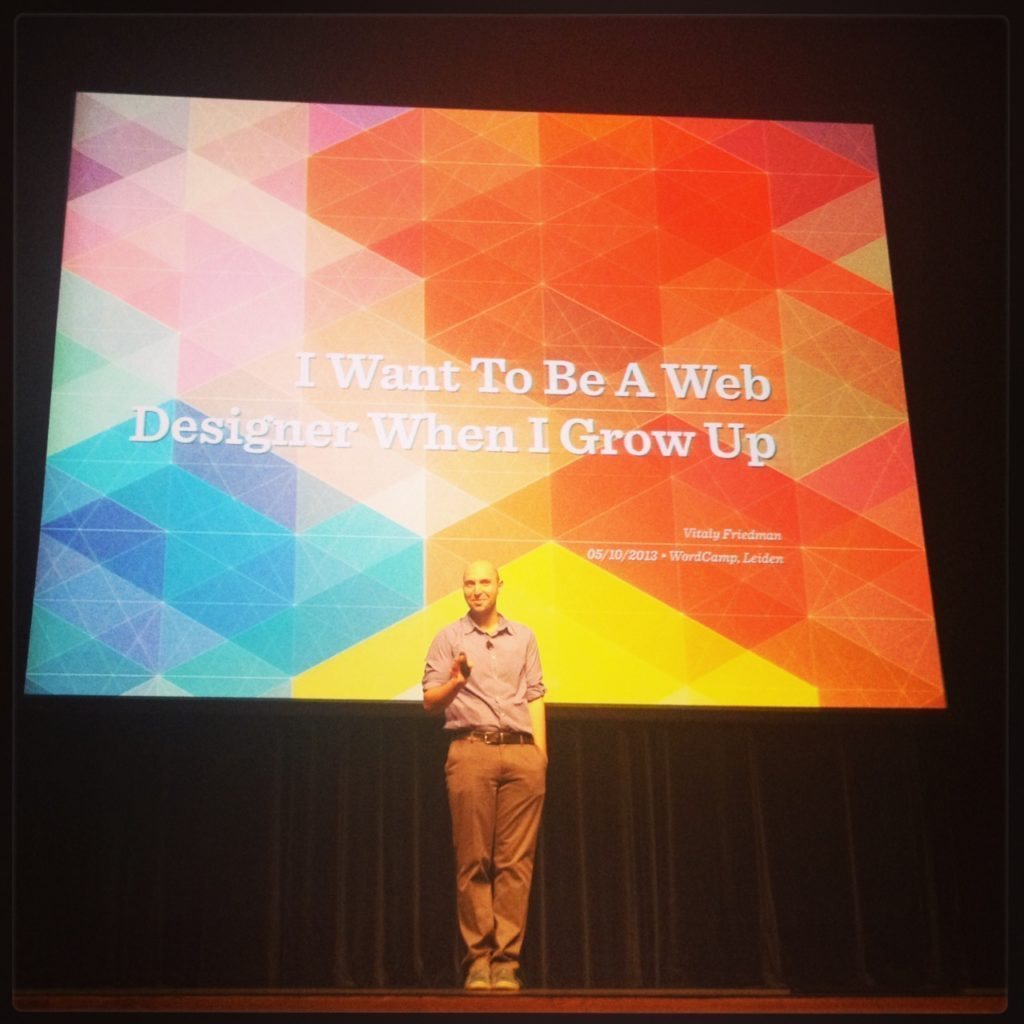 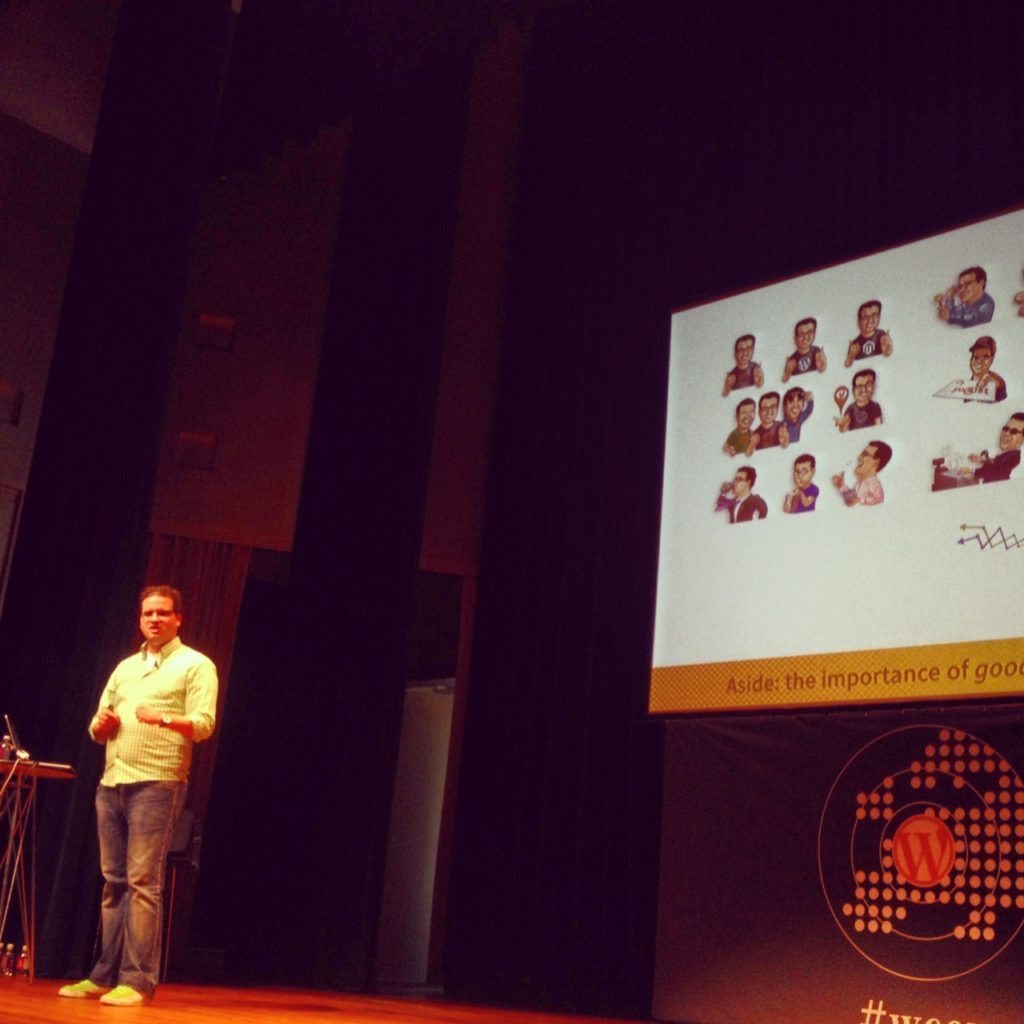 My only regret is that I couldn’t be present at every single talk (because they were happening simultaneously in two rooms).  See the full schedule here. Great line up, right?

Although every speaker had a great turn out, Noel Tock’s talk about Happytables seemed to be particularly crowded. And of course everyone attended Matt Mullenweg’s Q & A, with about 30 people lined up after for the chance to chat with him 1 on 1. 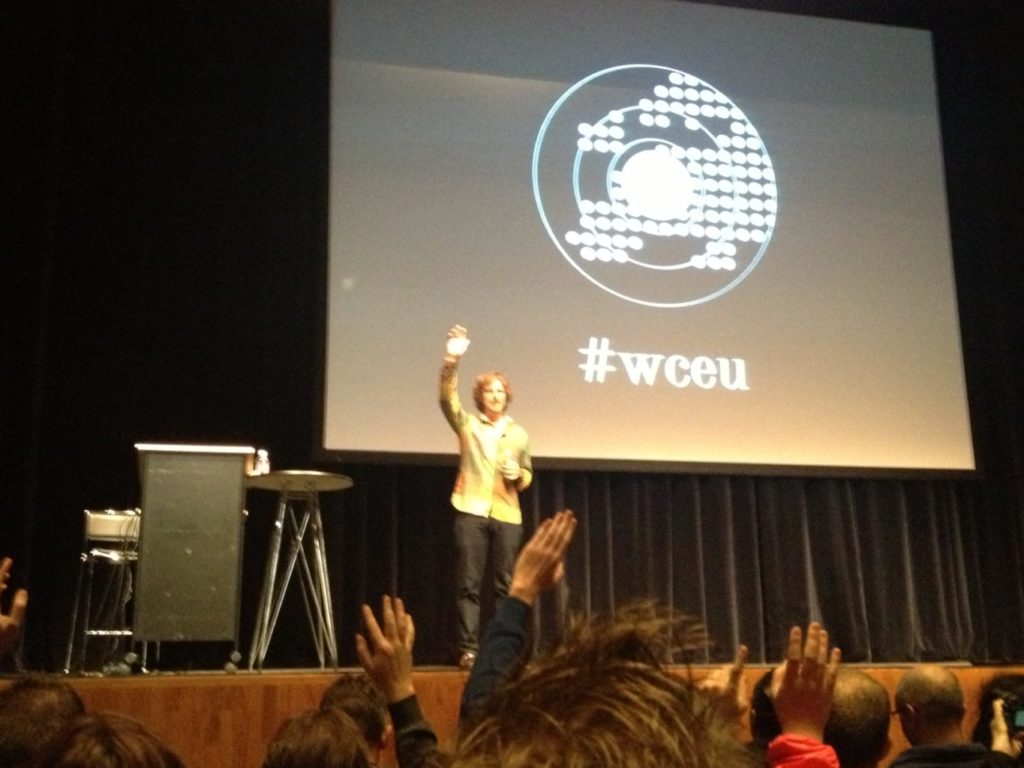 Zé Fontainhas was “The Maestro” of the event, and the “Speaker Toreros” were Siobhan McKeown and Ana Aires. These three were the most public of the organizers, as they were the ones introducing people on stage. Many other people were involved in making this event run smoothly, though. Here is the full list of organizers. 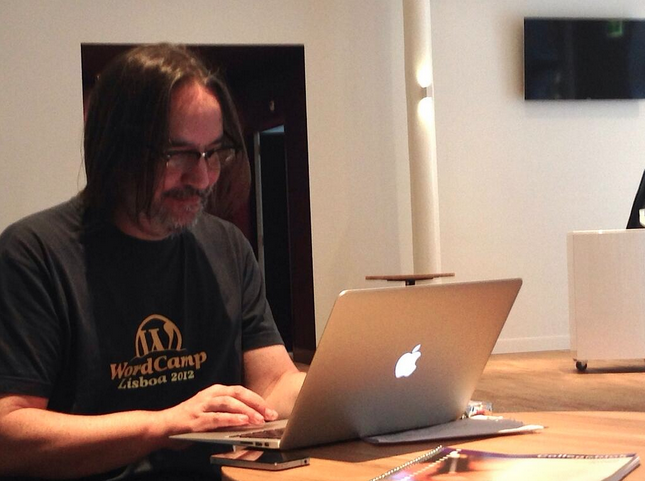 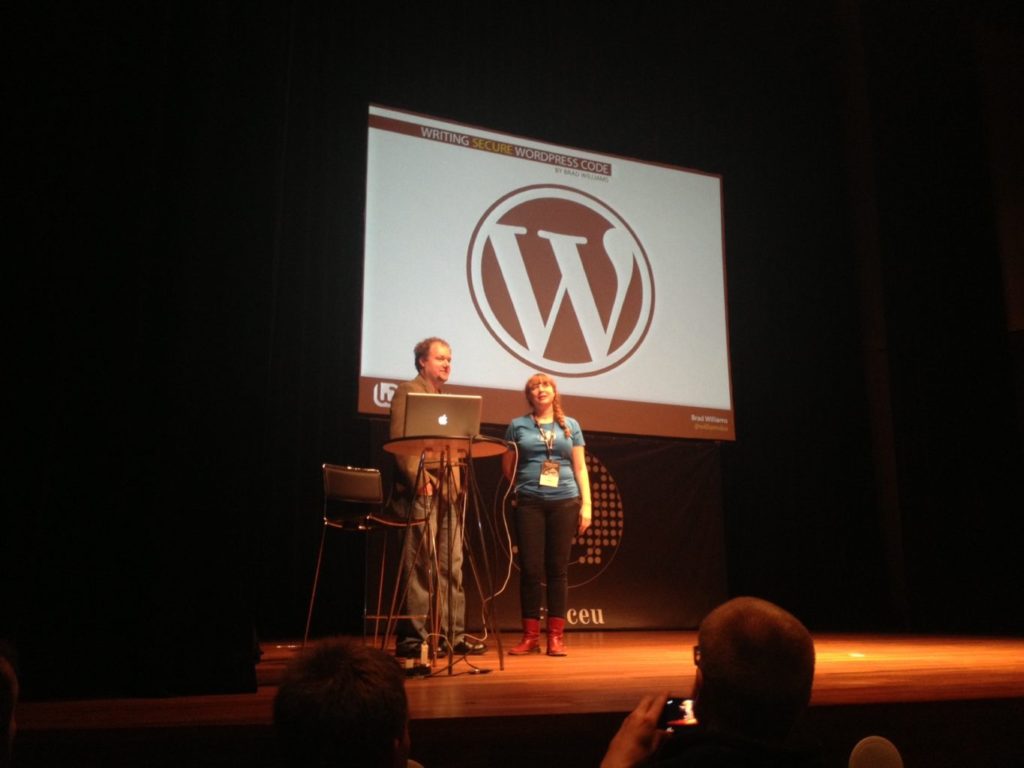 I have never had so many sandwiches in my life. Broodjes, Dutch sandwiches, are smaller than the typical American sandwich, so you can eat two or three. I thought they were great, but some people thought the combinations of ingredients were a little strange. I stuck with cheese and I was happy.

Shayda from WP Engine, grabbing broodjes for her team: 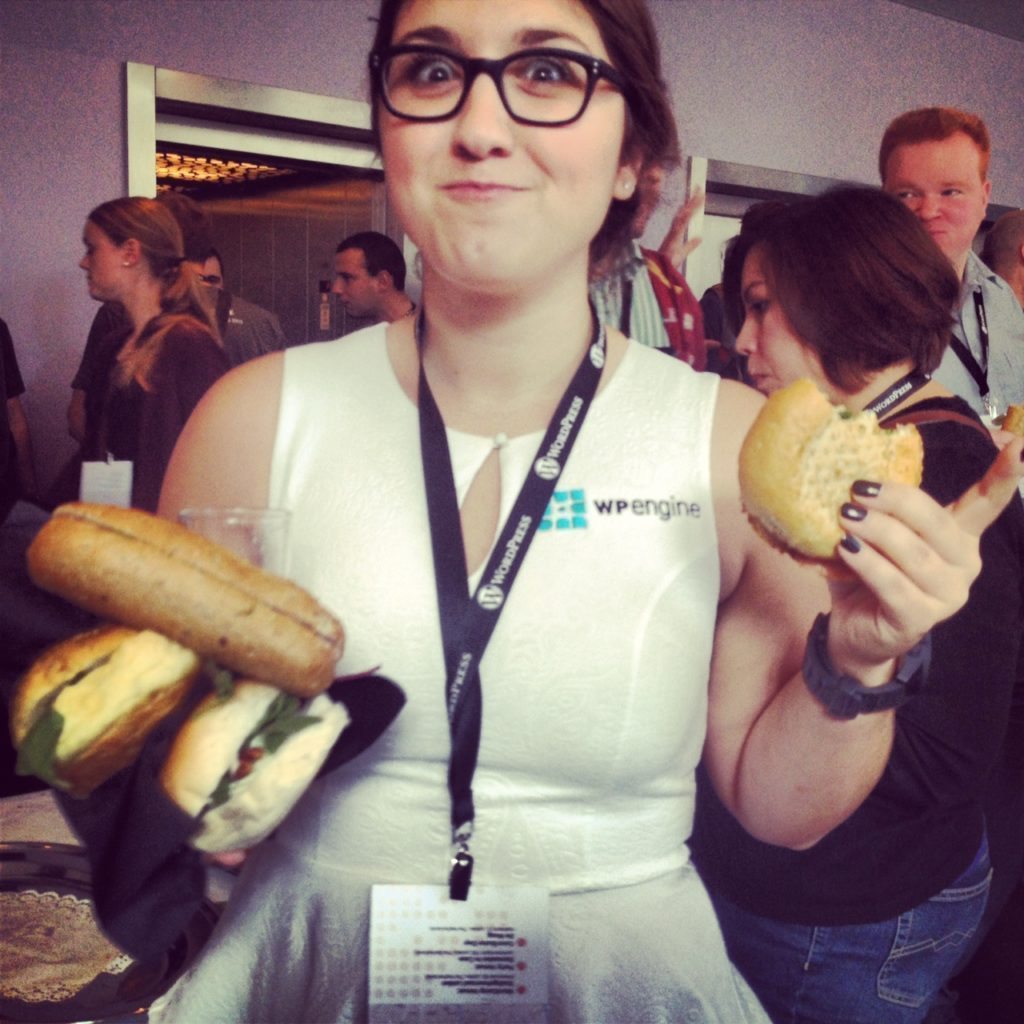 Unfortunately for you, but fortunately for the attendees, I do not have any photos from the party. But let me tell you, people were guzzling beer and dancing like maniacs to an eclectic mix of musical genres and eras. From metal to house, there was something for everyone. It was fun (and funny!).

Everyone had a blast, and it was noticeably less crowded at the event the next morning. I think a lot of people were nursing a hangover and I had to wonder, why didn’t they have the party after the second day?

UPDATE! Thanks to Zé, we have blackmail material! 😉 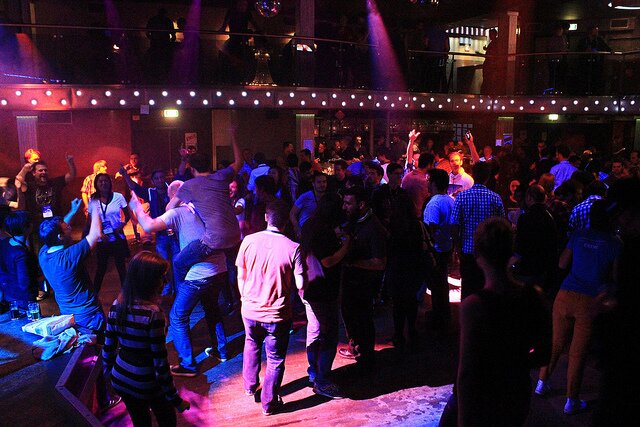 Over the course of the next week, I will be writing articles on more specific parts of my experience at WordCamp Europe. Please feel free to let me know what you’d like to read about most.

Also, if you were there and want to write about your experience, please reach out!