On Tuesday, WP Think Tank–hosted by Troy Dean–held an exciting discussion. The talk was orchestrated with the intention of having a long and meaningful discussion about the future of WordPress. The live panel included 8 well-known WordPress professionals who shared what they believe will happen to WordPress over the next 5 years. 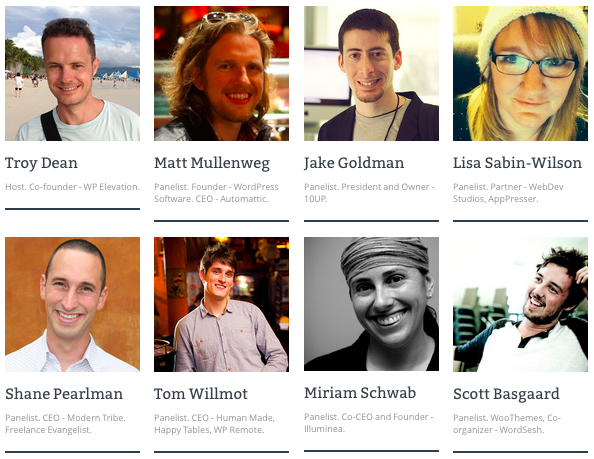 A live chat–filled with passionate WordPress users–simultaneously occurred with the panel. Chat participants were able to actively engage in the discussion by asking questions and sharing their WordPress knowledge and ideas. The chat provided valuable correspondence and interaction, and is still available for backread.

The panel covered a variety of topics, providing in-depth insight into the future of WordPress. For a deeper understanding, I asked Troy Dean to comment on a few topics from the discussion.

The 2-hour-long panel kicked off with a rather unnerving start, when the site crashed immediately as it went live. The exact cause of the crash is unknown, but Dean commented on it, stating: “we’re still doing a post-mortem on what went wrong but we believe it may have been the chat widget we were using.”

In an effort to divert the crisis, the live discussion was quickly moved to YouTube. No further technical difficulties ensued.

You would need to speak with Matt about that. However, it is in line with what he said in his state of the word speech about WordPress becoming an application development framework. I think the long term vision for WordPress is to become a platform that enables anyone to build whatever they need in order to publish whatever they want to publish.

Commercialization of the WordPress Space

The Think Tank went on to discuss commercialization as something that might be on the horizon for the WordPress space. WordPress enthusiasts in the live chat had similar thoughts as they chatted about “crowdfunding a Super Bowl ad for WordPress.” Whether or not this is actually going to happen any time soon is up for debate. Dean commented on this, stating:

I think crowdfunding a Super Bowl ad for WordPress is definitely possible, but I think there are some more important ducks we need to get in a row before anything like this happens…I think WordPress is going through some growing pains at the moment and the onboarding process needs to be smoothed out before anyone spends millions of dollars on Super Bowl ads.

So, What is the Future of WordPress?

Other topics in the Think Tank include: education, internationalization, and future development. The future of WordPress is both exciting and promising, and we are looking forward to more discussions like Tuesday’s Think Tank.

Watch the talk, and share your insight into the future of WordPress!