Day 3 didn’t disappoint, the organizers saving some exciting speakers for the big finale. While there was so much to cover from Day 3—from the Startup Battlefield final, to Matt Mullenweg’s surprise appearance—I’ve decided to focus on one of the things I particularly appreciated about Day 3. Girl Power. 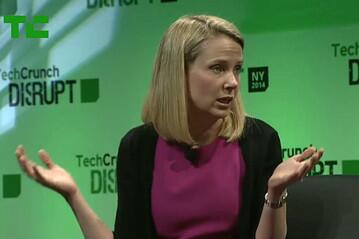 Why Are There No Women Partners in Any of Your Firms?

During a session entitled Is Winter Coming? Investing While Valuations Soar, TechCrunch’s Leena Rao asked 3 male investors—John Lilly of Greylock Partners, Alfred Lin of Sequoia Capital, and Bijan Sabet of Spark Capital—why there are no women partners at any of their firms.

They all admitted that there was a problem, and that their failure to address the situation “wasn’t good enough.” Alfred Lin of Sequoia Capital said:

I’m not going to make any excuses. We’ve tried, but we need to do more.

There was one woman on the panel; Shana Fisher of Highline Venture Partners. Fisher seemed less flabbergasted by the question. She said “the boring answer is that there are very few women in tech.”

People need to broaden their mind about the type and prototype that they are looking for. It helps to have a very broad and rich background. The more women who get into the tech industry, the better candidates you’ll have. Women have an advantage, they have a unique perspective and experience to bring.

Your Level of Greatness Isn’t Any Less Than Mine 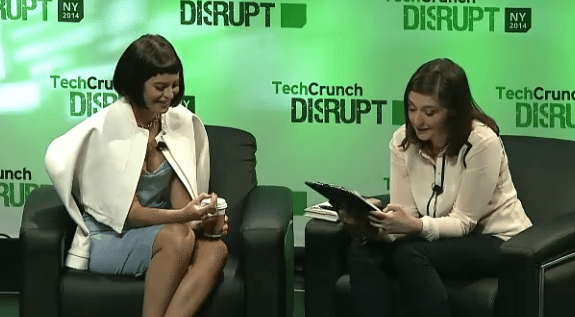 Sophia is a self-made woman, who has gone from dumpster diving for bagels to being the CEO of an online fashion empire with 300 staff and $100 million in revenue.

Amoruso admits she is from a different generation than the Sheryl Sandberg’s of the world. She asks in her book “if it’s a man’s world, who cares?”

I don’t know if there should be 50/50 sharing of the diaper changes, I’m not at that point in my life.

(Even though Amoruso and I are the same age, I’d love to see how she responds to some of these questions in 5 years…)

Despite his best efforts, TechCrunch founder Michael Arrington could not throw off Yahoo! CEO Marissa Mayer. He admitted as much to both Mayer and the audience during the interview.

Mayer discussed modern Yahoo!’s mission (“we want to be the world’s daily digital habits”), their forays into Netflix-style video content, and their goal of being “the world’s largest startup.”

Meyer told the audience how when she started at Yahoo! there were only 60 mobile engineers:

When I got to Yahoo, mobile was everyone’s hobby and no one’s job.

A sign of the importance Yahoo! is now placing on mobile, the number of mobile engineers has now grown to more than 500.

Marissa went on to the final session of TechCrunch Disrupt to be the only female judge of the Startup Battlefield final.

A Long Way From Titstare

I’m happy to report that my experience of TechCrunch Disrupt New York was a far cry from the Titstare incident in San Francisco last September.

It was clear that TechCrunch made an effort in terms of getting women on stage, both as role models and as battlefield contestants. It was also great to see writers like Senior Editor Leena Rao asking the hard questions about the underrepresentation of women in investment firms.

I left feeling hopeful that next year will see even better representation of women as both contestants and role models at the event.

Well that about wraps up my coverage of TechCrunch Disrupt New York 2014.

Check out the results of the Startup Battlefield final, and if you’re curious you can see who won the #TCDisrupt twitter competition.

Were you at #TCDisrupt NY, or did you watch the live stream? What was your highlight?