Mary Meeker’s annual Internet Trends report 2014 came out last week. At 164 slides, it’s a pretty long read. Josh Constantine of TechCrunch has consolidated down to a summary of 54 slides, which is still hefty, but more manageable.

It could be that I have mobile apps on the brain, following my double dose of app education last week. But for me, the biggest story of the report is the evolution and growth of mobile devices, and what they are doing to disrupt and benefit the wider economy.

Check out these stats: 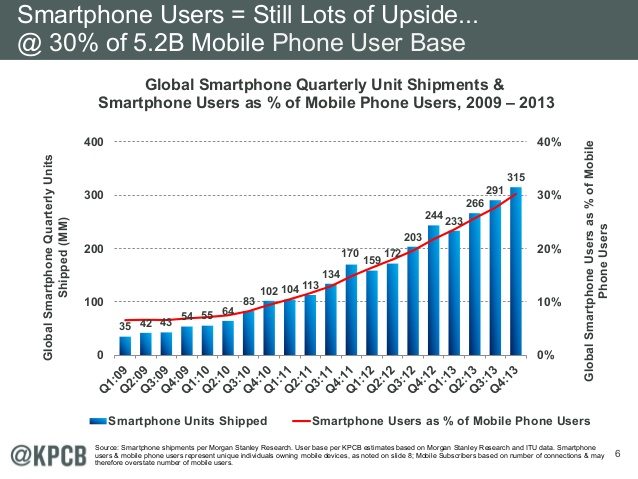 Wait, did I read that correctly…only 1 in 3 mobile phone users is a smartphone user?! Just imagine what’s going to happen when all those people upgrade to their next mobile phone and decide to make it a smartphone (especially in places with a growing middle class, like China).

And that’s why this next chart looks like it does. The crazy trajectory of mobile traffic as a percentage of global internet traffic (currently at 25%) is likely to continue or accelerate. 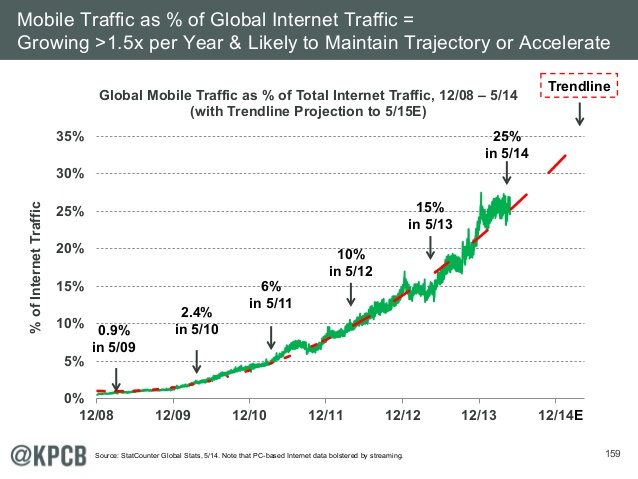 Let’s Cause Some Trouble

As Meeker points out, many markets have already been disrupted through the use of an easy-to-use, suitable, mobile interface.

My personal favorite is Uber, which has blazed an impressive path of disruption across the globe (and created some great content in the process). If I’m happy as a customer (though I do sometimes get grumpy about surge pricing), surely the drivers are losing out and being exploited?

Actually no, as Felix Salmon has pointed out, even taking into account average expenses incurred, full-time Uber drivers in places like New York and San Francisco actually get paid pretty well (better than most writers).

As Susan Athey, A Professor of Economics at Stanford University, explains mobile interfaces (i.e. apps) are letting us take underutilized resources and put them to use. This is the kind of stuff that gets economists giddy, because while of course there are some winners (customers/drivers) and losers (taxi drivers, airport fee collectors), society as a whole benefits from these kinds of disruptions:

I’ve been really excited about…startups that have figured out how to take underutilized resources and put them to better use. Economics as a subject is about efficient utilization of scarce resources. So nothing makes us more excited than seeing underutilized resources—be they cabs or cars that are used by Uber, instead of sitting on a corner they are now taking passengers—whether it’s rooms being used by Airbnb—whether it’s people with extra time being able to provide valuable services through TaskRabbit.

The Best of the Rest

Of course, the 2014 Internet Trends report covers many other topics. For the lazy-cheaters among you, TechCrunch has provided a nice short summary-within-a-summary at the end of their slides:

The Internet as a whole is growing, but mobile is growing even faster. Mobile advertising spend lags behind, as does our ability to analyze all the big data collected from mobile sensors. Cybersecurity is getting harder, and China is becoming a tech superpower. Television viewers are evolving to embrace the second screen, while also ditching TV for online video content. Any tech bubble that exists hasn’t swelled nearly as big as the one that caused the dot com crash. So while valuations seem high, businesses today are actually creating value, and have room to grow if they can master mobile.

However if you really want to know the current state of the internet, I recommend you give the real report slides a read.

Was any of Mary Meeker’s 2014 Internet Report a surprise to you?

Ernest Hemingway said: “As a writer you should not judge. You should understand.”  Kirby Prickett is passionate about writing, reading, and understanding. She is currently a writer at WPEngine. You can connect with Kirby on Twitter, Google+, and find more of her writing on her personal blog.