The online world is notoriously competitive. As an online entrepreneur, you should use everything at your disposal to gain an advantage.

One such “thing” is Google rich snippets. Rich snippets are a type of on page mark-up. Quite simply, they’re the extra images and bits of text that appear under the search results.

By making use of rich snippets, you make your search result stand out. The result: better click-through rate (CTR) and more traffic.

Recently, Google announced a serious shake up to, in my opinion, its most important form of rich snippet—Google Authorship.

Now, we’ve all heard the phrase: “Content is king.” This is probably truer now than the day it was coined. As more and more websites are created, only the best can rise to the top. And that’s why good content is so important.

With this in mind, it was a huge surprise that the changes made to the authorship rich snippet has actually reduced its impact. In short: The author image and Google+ circle numbers are now gone.

This is not the first negative change Google has made to authorship—in December, Google reduced the number of search results displaying the authorship snippet.

At first glance, this seems to have leveled the content producing playing field, which seems counter-intuitive: Surely Google wants to give every benefit possible to the top authors, right?

Today, we take a look at what the authorship rich snippet is, how it has changed, and the impact it has on you.

What Is Google Authorship Rich Snippet?

First up, a quick background of rich snippets and Google Authorship, for those of you that might be unfamiliar with them.

Google introduced rich snippets in 2011 to give its search engine users additional information to better help them find a relevant website for their search query. These little snippets would include key information to help users make their decision, making it easier for them to find what they were looking for.

For example, when looking for a restaurant, how would seeing just a big list of restaurant names help you pick just one? Wouldn’t it make your life easier if you could see the names, along with an average user rating and average main course price?

This is the essence of rich snippets. To see them in action, take a look at the screenshot below. 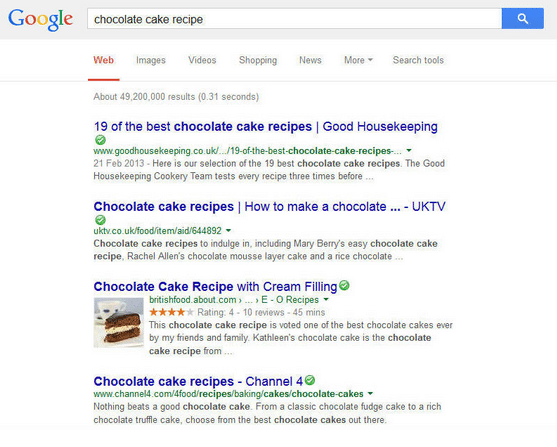 Which search result stands out? The one with the picture of chocolate cake, of course.

There’s a form of rich snippet for a whole range of search queries—events, products, recipes, and businesses, just to name a few.

There is also one for people producing content regularly—bloggers, for example—in the form of the Google Authorship rich snippet. That’s our focus today.

Google Authorship provides benefits both to authors and Google.

As an author, authorship puts an end to ownership disputes, as you are able to claim your work. It also enables you to build your author rank in the same way a page builds page rank in SEO. If you’re a highly ranked author you would receive a rankings boost.

For Google, this was a way to move content produced by a respected source to the top of the SERPs–great for user experience–and to incentivize the production of top quality content.

The Changes to Google Authorship

At the end of June, Google announced big changes to the authorship rich snippet: The author’s profile image has been dropped from the search listings.

The Google+ circle number has also been removed, but it’s the loss of the image that will frustrate writers the most.

For authors, this was perhaps the most beneficial element from the original authorship snippet—the image helped your result stand out from all the other listings, and this improved your CTR.

To see the visual impact this has had, let’s take a look at some more screen grabs.

For those of you pining for the old days, this is what the authorship snippet used to look like – complete with image, name, and Google+ circles. 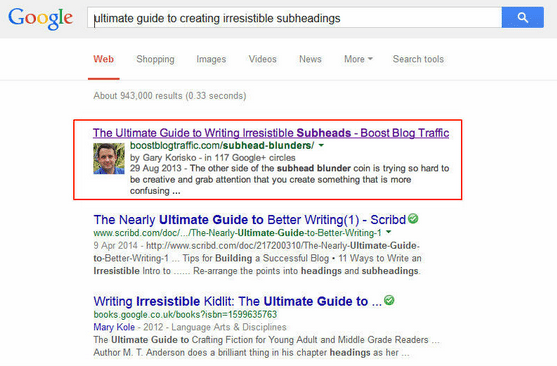 And now, we’re left with this. 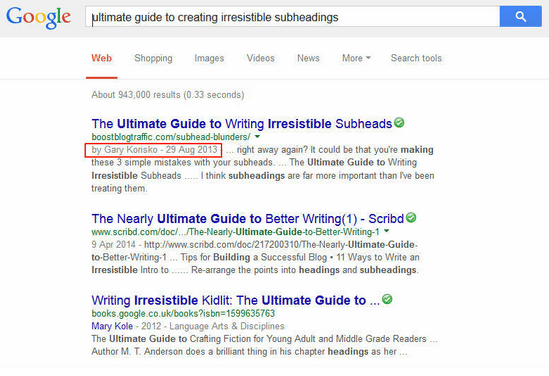 The author’s name will still be displayed, but, as you can see, everything else is gone.

Should we have seen this coming? Perhaps.

Google diminished the power of the authorship rich snippet in December, by reducing the number of authorship snippets appearing in the search results. There were also a couple of times in May when authorship was completely removed—possibly allowing Google to assess the impact any changes would have.

Even so, the changes surprised many.

How the Changes Impact You

The biggest reported benefit from the authorship snippet was to CTR. Some users reported up to 150% jump in their CTR as a result of Google Authorship.

Now that the images are gone, much of that CTR boost will be lost.

The image made your listing stand out against your snippetless competition. Without it, you have less to grab a user’s attention—this can clearly be seen in the two comparison screenshots I included above.

Your CTR will be further hit—albeit to a lesser extent—by a loss of your social proof. Authors with 5,000 people in their Google+ circles would be more likely to be clicked on than an author with only 200, because every person in their circle is a vote of confidence.

Now, it goes without saying, but a drop in CTR will have an impact on your traffic figures. Expect a drop in traffic volume as a result of these changes, at least in the short term.

How much will your CTR fall by? Well, this really depends, but it’s worth noting that Google’s John Mueller claimed that the CTR after changes to authorship were similar.

If you produce content in a technically-savvy niche—for example, Internet marketing—the impact should be less severe. In such niches, there is a high probability that your competition is taking advantage of rich snippets, too. The recent changes impact everyone across the board, maintaining the status quo.

I also believe the changes will hurt the big name content writers the most—the authors we instantly recognize. Seeing a respected source like Neil Patel in the search results gets my click, so for him, losing his image might be felt more deeply.

So Is Google Authorship Dead?

Although the value of having authorship associated with your work has undoubtedly diminished, the Google authorship rich snippet is still worthwhile.

Not all types of rich snippets include an image, yet all rich snippets are proven to increase CTR. The imageless authorship snippet is no different.

Besides the images and the Google+ circles, authorship is unchanged.

By using Google Authorship, you can still improve your author rank, which can give you a rankings boost—according to some people, at least. And you can still avoid content ownership issues by putting your name to a piece.

Setting it up is easy, and well worth the 5 minutes or so it will take for you to do so.

With Google regularly emphasizing the importance of producing top quality content, the latest changes to the authorship rich snippet do seem, well, bizarre.

Even so, the online world moves quickly, and we have to adapt to changes in Google’s rulebook if we want to survive.

The authorship rich snippet is still valuable—less so, but valuable nonetheless.

You should still take advantage of it.

What are your thoughts on the changes made to Google Authorship? What do you think is in store for the future of Authorship?

Shaun Quarton is a freelance blogger from the UK, with a passion for online entrepreneurship, content marketing, and all things WordPress.