AppPresser has generated a tremendous amount of interest since its release at the start of this year. This shouldn’t come as a surprise given its ability to quickly and easily turn any WordPress site into a smartphone or tablet app, providing both developers and individual businesses a tool of staggering potential.

WordPress is already the world’s most widely used content management system. Now, you can take any existing web content created on the platform, import it into a ready-made app, and distribute the resulting app to Android and iOS users through the iTunes App Store and Google Play.

Is AppPresser Really Simple to Use?

There are areas where AppPresser has huge advantages over the traditional ways of creating/developing apps. To date, you’ve had to pay (often exorbitant) monthly fees for other comparable services. With AppPresser, you buy one version that suits your needs for a one-time fee. Your costs are fixed. . . and surprisingly low. 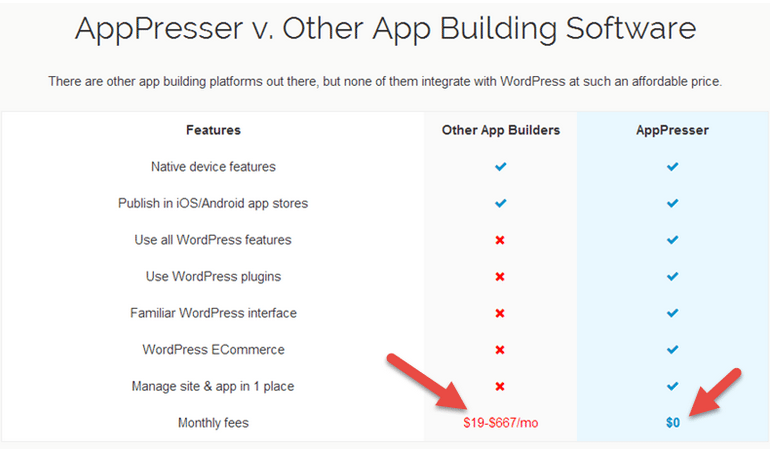 You can use the program itself without knowing anything about programming languages like Java or Objective C, and you don’t have to get into SDKs either.

But still, if you are an end-user who knows very little about programming (not being conversant with hooks, filters, etc.) there is still a considerable learning curve. AppPresser, without a doubt, makes things a lot easier, but using the platform is not as simple as installing a theme or a plugin. As the company says on their website, “AppPresser is a development framework. If you aren’t a developer, you might want to get help.”

Fortunately, help is available. One of the encouraging things about AppPresser in general is the amount of thought that seems to have gone into it. This effort is reflected in their website.

Every instance where there might be a barrier, they offer a solution. If you’re a web designer, but not a developer, or if you’re an—excited by the chance of getting an app out there but with no real development skills—then AppPresser, the company, will develop the app for you. There are costs, of course, but those costs are still considerably lower than alternatives. The end result is a more flexible product, one that’s easier to update should the need arise.

There is considerable justification for the hype surrounding AppPresser. And with roughly 1 in 5 of the Internet’s websites based on WordPress, there is massive potential for the tool.

Add to that the legions of existing plugin developers who will be looking to take advantage of new markets, and this thing really could reinvent WordPress and certain aspects of app building.

What’s not clear at the moment is how all these possibilities translate to applications of real-world value. WordPress can’t build games or create tools like word processors or spreadsheet makers, so therefore AppPresser can’t either.

Additionally, if you’ve built a WordPress site using a responsive theme (and almost everyone does now), your content is already easily accessible to smartphone and tablet users. So, why do you need an app? AppPresser apps still need a cell or wifi connection to be opened, so there’s no real advantage on that side of the coin either.

AppPresser is definitely a great idea, but for most small businesses, it begs the question “why”? For most websites, there is no real advantage in having an iOS & Android app when content is already available via a web browser.

The tool still has a few kinks to work out, but when it gets everything in order, I’m convinced that we will see a huge movement towards apps in the WordPress space.

Jonathan John is a WordPress enthusiast and freelance blogger. He loves comparing WordPress plugins and themes, sharing the latest Automattic news, and helping non-techies get the most out of the world’s favorite CMS.