Did you know we are in the year 1 A? That is the year before Apple releases their wearable device and changes the course of life as we know it. . .

Or at least, that’s according to Robert Scoble, one of the speakers at The Future of Wearable Tech and Beyond, a “Wearable Wednesday” event held at Wearable World Inc. in San Francisco last night. 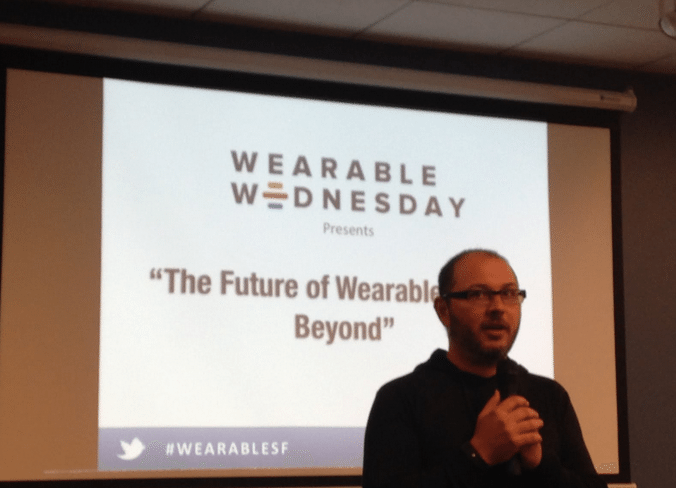 First up was a rather rambunctious panel discussion with Robert Scoble, Andy Grignon, and Ben Parr, mediated by Redg Snograss the CEO of Wearable World. They discussed the barriers to the adoption of wearables and where they see things going in the future.

Ben Parr, Co-founder and Managing Partner of DominateFund, thinks the biggest issue for wearable devices is that they don’t become habits for consumers (as he recently penned on Medium). One of the reasons for this is the need to take the devices off for charging. Hence, Parr sees next-generation batteries or wireless power as a key issue.

Parr also commented that wearable device makers need to worry as much about design as they do about function. He agrees with Scoble that the first wearable product from Apple will be important simply because Apple does design so well.

Andy Grignon, who is the founder of Quake Labs and was involved in building the first iPhone, noted that wearables by definition are personalization devices—so fashion matters. He also agreed with Scoble’s point about Apple, saying:

There will be a big change, for better or for worse, when Apple drops their [wearable] product.

Apart from the whole “1 A” thing, Scoble, who currently works for Rackspace, noted that he thinks that things that touch the skin—i.e. wearables—need to come from companies that have empathy.

Next up was a presentation from Dennis Wingo of Skycorp, who talked about wearable tech and space. He noted that Google Glass today is where the computer was in 1975—and showed a nice vintage slide of an Altair 8800 computer.

Wingo also had this to say about wearable technologies: 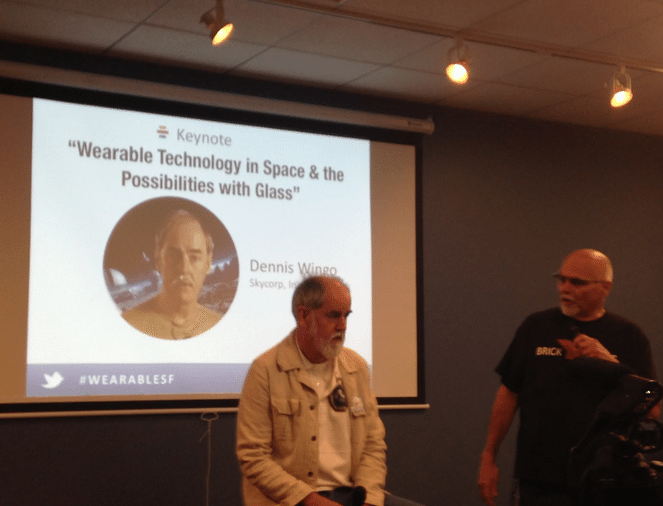 The event rounded off with a Fireside Chat between Daniel Kraft of the Singularity University and Redg Snodgrass. In particular, Kraft sees an opportunity to shift from our current system of “sick care” to one of preventable health care, with the help of the quantified self movement and wearable technologies.

Kraft admitted he was wearing 6 sensors, and kept pulling different wearable medical devices out of his pocket to demonstrate to the audience. . .almost like a medical wearables magician.

One of the coolest examples Kraft used was the possibility of 3D printing your own personalized medicine pills, specific to you. So, Kraft noted, if your device knows you have a bit of a hangover, it can add an extra dose of aspirin to your pill that day.

Overall, it was an interesting, if not a little “brosy” event. I would have liked to have seen more serious discussion around the privacy implications of wearable technologies, including the responsibility of companies in relation to their users’ data (there was some brief but vague talk of getting public policy people involved).

Also, as the speakers noted, an understanding of fashion and an empathy for consumers are important factors for players in the wearable space (except perhaps for those focused on enterprise—such as medical device wearables). It would have been nice to have seen a little more empathy, diversity, and perhaps even some fashion expertise on that stage.

Do you think Apple will revolutionize wearable devices? Share your thoughts in the comments!

Kirby is the Storyteller at Prospress, an eCommerce software company standing on the shoulders of WooCommerce. When she’s not blogging for Prospress, Kirby likes to read, write her personal blog, and dream about Australian beaches. You can connect with Kirby on Twitter, or Google+.