Brian Krogsgard shared early this morning a near 2,000 word post on his thoughts of his newest public project, Post Status, which we’ve covered previously here when it first launched – it has since grown up a bit as well as Brian’s perspective on the whole endeavor and is an incredibly honest look at what the site’s intent was, what it became through user interaction, and where it may eventually head.

The evolution of the outward facing property as it sits today hasn’t changed much (at least not yet) but we can expect to see some things change (even monetization) as Brian moves forward. What has changed dramatically are Brian’s thoughts around building the property, launching it publicly, and iterating internally from the initial motivation and what it is today.

And this is how all online properties evolve, grow, and transform. There’s an initial idea, a concept, a proposition of what the owner expects might happen and then there is the truth of what actually happens when you get it into the hands of the public. The success of said property is the ability to evolve with the growing needs or interaction that you experience and holding fast to the original vision.

I’ll be honest, it’s a tough balance for sure and one that I’ve experienced many times. 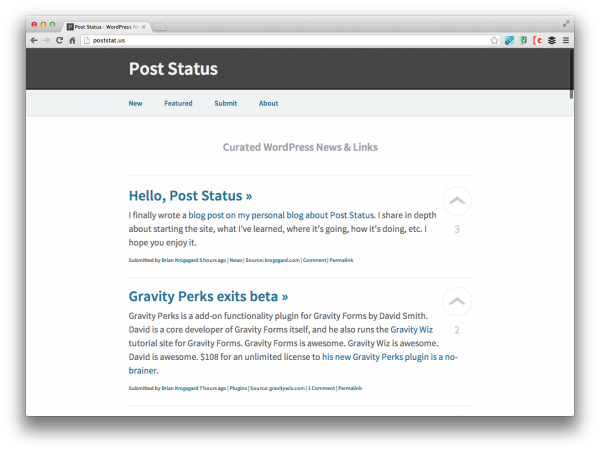 Already, even here on WP Daily, we’ve experienced a lot of growing pains, as we’ve found great allies in the community, met more than a handful of trolls, and even tip-toed around really sensitive and emotional topics regarding licensing and the GPL.

And I’m glad to see Brian walking through it and sharing the progress via his personal blog – we don’t always get to see the behind the scenes look at products and more often than not we see things in these massive updates after too much time has passed. But I think Brian’s openness to it shows clearly his interest in making it a community-endeavor, as he originally hoped when he first launched.

But of course, he already has a decent backup plan if things went south:

Well, with WordPress I own my content, and I can easily find those links. So if all else fails, which I really hope it does not, Post Status can always be my little link blog.

What I’m really excited to see is Brian’s plans for monetization – as I shared in my comment if he can tackle that beast to the ground then he’s essentially found victory in one of the most difficult challenges of any blog / site owner on the internet.

And, he does it, then I might “borrow” an idea or two from him. Keep it up Brian and glad to see that it’s seen some great growth and that it’s trending positively. Keep iterating and keep making it better. This is a marathon game, not a sprint one and if you can outdistance the so-called Bermuda Triangle then you’ll be in great shape.

You’ve got some fans over here at WP Daily so just let us know how we can help.