If you joined me a few months back you might recall my adventure blogging with just my Smartphone and a Bluetooth Keyboard. I managed to get by but it was always a case of getting by and not unnoticeable or thriving.

However a new Kickstarter project might just be a way to change things from surviving to thriving. 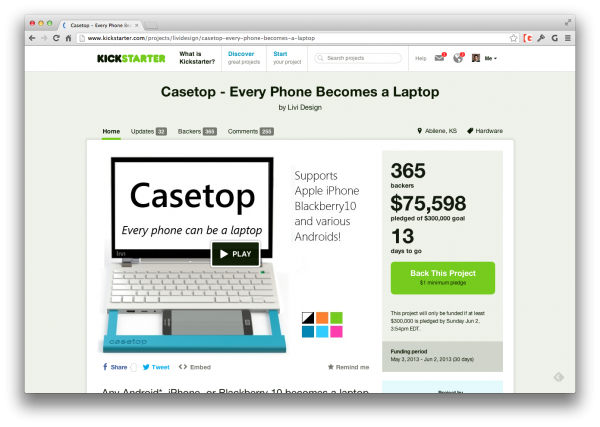 Meet Casetop from Livi design, a way to convert your phone (not just an Android, but iOS and Blackberry as well) into a laptop and creating a great blogging machine.

If you remember some of the common problems with Blogging on a phone or tablet they include.

The Casetop addresses at least three of these issues. The keyboard, the screen size and the combination of the two. By plugging your phone into the Casetop it adds a keyboard, and 11.1″ screen and a battery that extends the total battery life by up to three times.

This combined with the growth of good Word Processing application for mobile OSs means that the Casetop can turn your phone into a long battery life, quite, mobile blogging platform quick and easy to use on the go.

One of the really interesting aspects of the Casetop are the frontbars. At first glimps they are just there to keep your phone in place, and that is certainly what the first incarnations will be. However, the Casetop has big plans to add on extra functions into the Frontbars to extend the functionality of the device.

One of the nicest aspects of the Casetop is that it is aiming to be upgradable. Both with the obvious phone upgrading providing a more powerful process, camera, and OS upgrades but also with the actual hardware whilst reducing the environmental footprint by keeping certain elements the same.

This can be seen already in the frontbars but it doesn’t end there Casetop want to make the device completely future proof (from the off) but remain Environmental. For example, If a higher resolution screen comes out that makes the pixel look positively low res, the Casetop will make it possible to upgrade just that part and let you keep the same keyboard and case that the device came with.

The closest comparison I can find to the Casetop is using a 10″ tablet or similar with a bluetooth keyboard and then finding an external battery. At first glance this might seem like a cheaper alternative (especially if you have a Tablet already and certainly if you have this set up!) but in the future you’ll need to upgrade both your tablet and phone rather than just one device.

Another comparison could be the Asus Padfone which is a phone with a tablet doc. If you added a keyboard then you would have the extended battery life and greater connection between the two devices. However, the Padfone cost close to a $1000 and when a new phone comes out you’d need to replace both.

But Can A Phone Really Replace A Laptop?

The question above isn’t really fair. We’re not comparing a phone to a Laptop as it’s a phone in a doc to make it like a laptop so really we’re just comparing the OS and software. I can’t remember who said it but in the spirit of 56.7894% of statistics are made up, a phone/tablet can replace 90% of a regular computer.

For a blogger, there are issues with spell checking, image editing, coding and editing the files in the background of your site but these aren’t issues that every blogger has regularly or even at all for those who use a hosted system like WordPress.org

If you like the idea of the Casetop (or you aren’t sure but want to check out more then head over to the Kickstarter page.