Now the real work begins as they complete their partner awards and press on toward launch! Oh yeah. It’s going to be grand.

Now the wait begins to see what the product will become and how it will stack up against competitors. 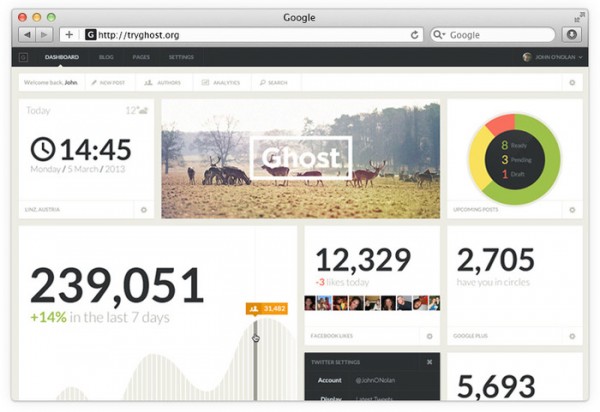 With the campaign now closed, Ghost raised £196,362 of a £25,000 goal, which is quite impressive. John O’Nolan released this quick update on the final day of funding to remind users of their last chances for certain backing points, as well as asking them to promote the project however they see fit.

With the close of funding, we now wait to actually get our hands on Ghost and see what it’s really going to be like.

I think it’s an interesting idea to say the least, as well as an ambitious one. There are quite a few blogging platforms available already, with many making headlines recently, so bringing another to the table is an ambitious goal. However, with the amount of support we’ve seen for it evidenced by the well-surpassed Kickstarter target, Ghost may very well be a force to be reckoned with.

Did you back the project? Are you looking forward to seeing what comes of this? Let us know in the comments!