For those that are monetizing sites or helping others monetize their WordPress-powered sites then you know that advertising is a very large and important part of their venture.

Although there are many ways in which you can monetize a site effectively and that have proven to work it’s sometimes the more difficult strategies that prove to be the most effective.

Why don’t most people do them then? Because they are just that, more difficult, costly, and requires more things like A/B testing to prove effective. 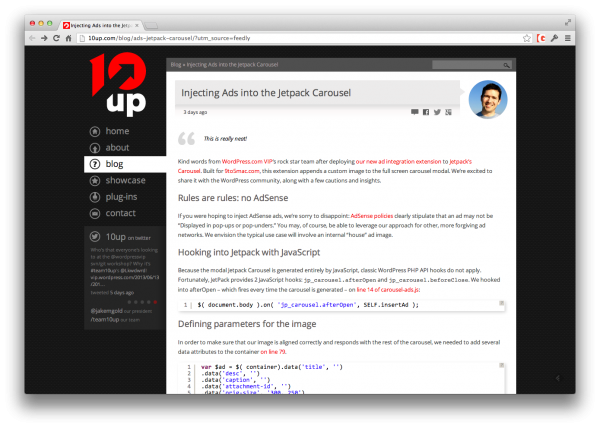 One example is monetizing videos and monetizing images, like carousels. For most people they see these image carousels all the time on major media blogs with the interstitial advertisement every once in a while.

Well, you too can do that via Jetpack thanks to 10up’s ingenuity:

This is code to add to a theme or plugin that will hook into the Jetpack Carousel init and add a specified image ad to the end of the carousel.

If you were hoping to inject AdSense ads, we’re sorry to disappoint: AdSense policies clearly stipulate that an ad may not be “Displayed in pop-ups or pop-unders.” You may, of course, be able to leverage our approach for other, more forgiving ad networks. We envision the typical use case will involve an internal “house” ad image.

And that’s that. Get it here via GitHub! You an learn more about this via their announce post. Very clever and very thoughtful in terms of releasing it to the public!