Things keep getting better and better with Gravity Forms, who have now released their 1.7.6 version. A ‘major’ release for them, they are introducing their “add-on framework” which will allow developers to create add-ons for the popular plugin in a much easier fashion.

This could be a boon for the growing product as more people create more value for the network of users as a whole:

One major non-user facing change that we are extremely excited about in this release is the first iteration of the Gravity Forms Add-On Framework.

This is a framework built into Gravity Forms to allow both developers to develop Add-Ons more efficiently and quickly by standardizing a lot of the things that almost every Add-On needs or utilizes.

This will be extremely helpful for both Add-Ons we develop and Add-Ons developed and released by 3rd party developers. 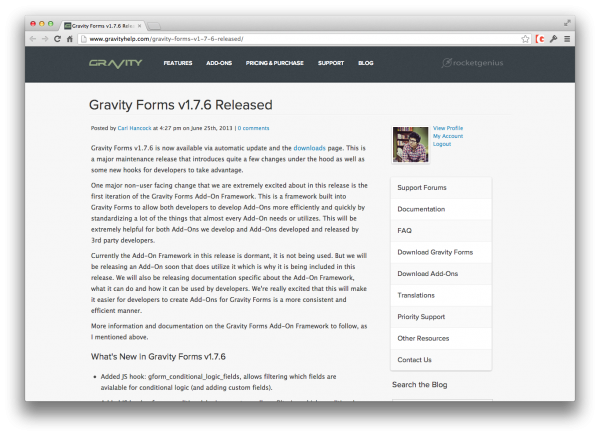 Now, you won’t be able to use it quite yet but they’ll be announcing documentation shortly.

Two recent implementations here at WP Daily that is using Gravity Forms is our Pros Network and Job Board, both of which have gotten tons of attention. Hey, it works perfectly for our MVP launches and to get traction.