It seems that a growing trend among marketplaces is to leverage a combination of the following pieces of strategy:

Remix a couple times and you’ve got a decent shot at making a marketplace not fall completely flat on it’s butt. 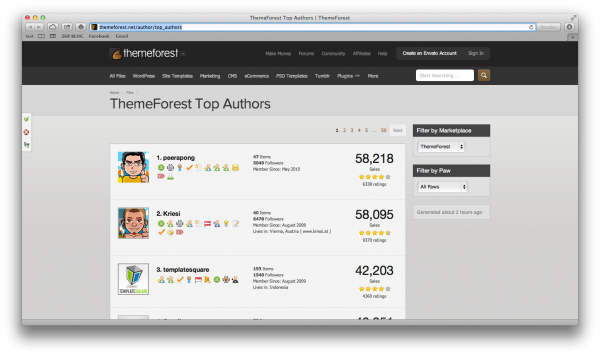 For example, Envato and ThemeForest has been rocking public performance boards to engage their users and to create competition within the author world. In a recent upset, Peerapong has eclipsed the ever-present Kriesi for the top spot on the boards:

There has been strong competition between Kriesi and Peerapong for some time. In December 2011 Kriesi became the first Marketplace author to reach the million dollar milestone in sales, then just five months later Peerapong did the same. Then in March this year, Kriesi passed the two million dollar mark, and Peerapong followed suit just a month later. He seemed to be catching up.

He was. Recently Peerapong overtook Kriesi, and is now ThemeForest’s top-selling author. That’s an incredible accomplishment for both authors—Kriesi for holding the spot for so long, and Peerapong for the perseverance which put him in front. Congratulations!

This use of social influence and peer-to-peer (public) competition is awesome. It seems that others, like MOJO Themes, is taking note who have shared in their recent roadmap report that they are also introducing some neat incentives:

As we launch into some the largest web hosting companies we will have serious demand for several products within existing product types. For example, we’ll pay cash bonuses for new items that we’re looking for to fill up new categories within Themes, Graphics and Plugins.

Not bad at all if I do say so myself. 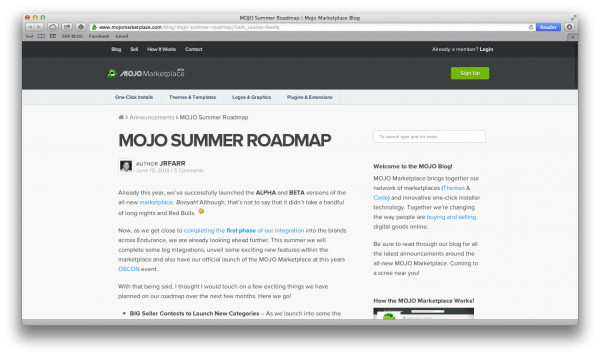 With the right ingredients, a trusty brand, and great products you shouldn’t ever steer wrong. I’m sure this year (and upcoming years) we’ll see more and more marketplaces take shape.

As long as you don’t completely suck at launch (like this one recently) then you should do just fine.