The Kickstarter project Ghost is in full-swing now as they’ve received their funds (it takes some time) and their able to expand their team and fully concentrate on building product.

Hannah is currently working her last 2 days at MOO, after which she will be officially be on Ghost full time (!!). The Ghost Foundation has also made its first full-time hire in the form of Matthew Harrison-Jones, a recent graduate who has been helping us out all over the place this summer with front end code. He’s now holed up in a small office in Wales, helping us bring the Ghost website and application to life.

And although they are a bit “behind” schedule I don’t have any issues with that personally (and neither should anyone else) – they should be able to pick things up swiftly and start kicking some serious tail:

As I talked about in update #3, our initial goal was to have a VIP/Early-Developer-Access release around mid-June. We’ve slightly (ahem) passed that initial mark, but we’re tantalisingly close (as in days, rather than weeks).

There are a couple of core components that we want to stabilise to make sure no fundamental part of the core Ghost platform will completely change in a way that would adversely affect theme and plugin developers, and then we’ll be opening up Ghost v0.2 to all Kickstarter VIP level backers and higher to start using, testing, and giving us feedback! 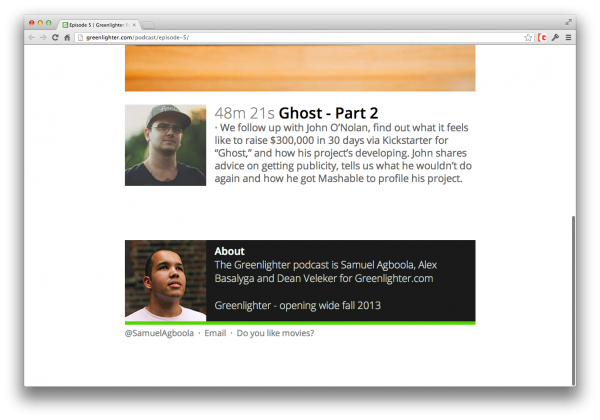 Also, John spent some time on a recent podcast that’s worth a listen as well:

We follow up with John O’Nolan, find out what it feels like to raise $300,000 in 30 days via Kickstarter for “Ghost,” and how his project’s developing. John shares advice on getting publicity, tells us what he wouldn’t do again and how he got Mashable to profile his project.

Check it out here.