One of the biggest barriers of entry for new users looking to contribute to WordPress core development is Core Trac, the bug and issue tracker for WordPress. Thanks to the efforts of Andrew Nacin, that barrier of entry has been lowered a bit with some great improvements in the new year. Trac has had a bit of a facelift, both aesthetically and functionally, to make it a bit easier to navigate and use. Thought it might be good to check in and let you know what’s new.

The most obvious change is the few design tweaks that were made. The typography has been switched over to Open Sans, and there has been some generous whitespace added to improve the reading experience. The colors of links and callout rows have also been tweaked a bit to make them stand out.

The resounding hurrah comes from the removal of HTTP authentication in favor of WordPress.org cookie authentication. For experienced Trac users, this should be very refreshing news. For all others, just be happy you won’t have to deal with logging in multiple times accompanied by an irritating dialog box anymore.

IRC mentions have also been rolled into comments, so if a ticket is ever mentioned in a WordPress IRC chat, it will be logged in the ticket itself, along with a link to the logs. That way, users can easily track previous discussions outside of Trac without having to move back and forth. Images and screenshots can also now be seen inline in comments. A small addition, but a valuable one. 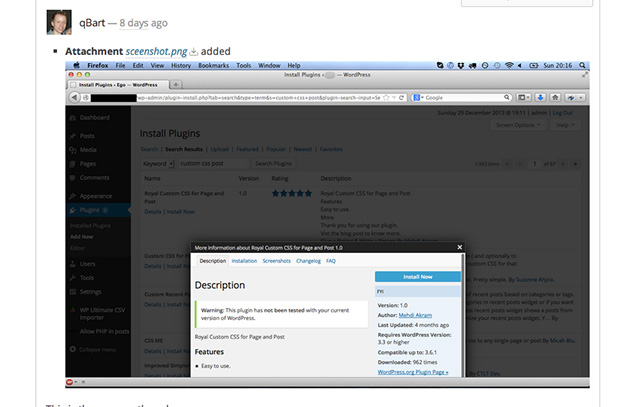 To me, though, the most important changes were those that can aid first-time users or newcomers. The default screen, for instance, is now a query of open tickets that you’ve reported, instead of open tickets you own, which will be few and far between for the newbie. Email address syncing has been improved so your WordPress.org account and Trac account are the same. Committers are now clearly labeled in a parenthetical next to their usernames so they can be easily identified. And a few confusing checkboxes and options have been removed. This is where the difference is needed, and I hope it encourages WordPress users to join the cause.

If you were considering joining up with the community effort to help build WordPress, now seems like a great time. Core Trac is getting a lot less confusing, and I think that will make a big difference.