If you follow many WordPress blogs and news sites you’ll know by now that Pressgram is in the wild—released into the iOS App store at the end of last week.

Starting life as a Kickstarter project launched by John Saddington, Pressgram promised to be a couple of things. One, a direct response and alternative to Instagram’s new policies around the images that are submitted to their service. And secondly, a simple way to connect the dots for the many WordPress users who’d like a way to quickly and easily take photos on your smartphone and send them to your WordPress site.

So, how does it stack up?

Well on the first point, it succeeds to meet the goal without question; stop using Instagram and start using Pressgram—problem solved!

Your photos are under your control and they’re on your WordPress site. If you choose, they can also be posted to Facebook and Twitter, as well as the Pressgram social network. 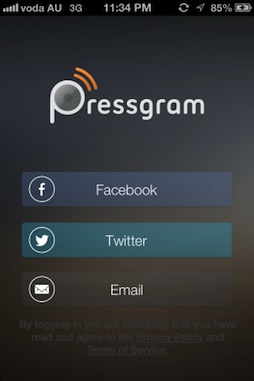 The initial setup of the app is a breeze. You’re given three options: login with Facebook, Twitter or create an account with your email address and password. For the first two, these are setup at the OS level so you don’t need to even enter a password, it just uses the existing accounts and you’re up and running.

The WordPress side of things is just as straightforward. You enter the URL of your site and then a username / password. On the site that I’ve been testing with I used an administrator account. But I’m guessing if you use any account that has permissions to be able to write a new post it would work.

The camera tool works as expected; you take a new photo, immediately add filters and send it. Each time you work with a new photo you can choose where it goes. Select just your WordPress site or Facebook / Twitter, or all three. I’ve only set up one WordPress site at the moment, however the app allows for multiple WordPress configurations—so you’d be able to choose which site to send the photo to if you have more than one.

Like Instagram, you can also work with photos that are in the camera roll on your iPhone, perhaps taken a while back or with another app. This works well apart from one little annoyance: if you have a few albums on your phone, it always defaults to the first one alphabetically. I think it would be better if it started in your camera roll or perhaps remembered the album you were in most recently.

Each time you choose to send a photo to WordPress, Pressgram allows you to set the post title, tags and categories as well as the post content. It’s all fairly self explanatory and works as expected.

There is a bit of a “gotcha” here, though, but it not impossible to overcome. I wanted to set up a section of my WordPress site that would just be a stream of photos coming from Pressgram, but not have the photos intermingled with the main posts on the site. So creating a new category of “Photos” was the first step, but still these were all going to show up on the home page. It’s configured, like a lot of WordPress sites, to show the latest posts on the homepage.

John has thought about this and created a solution: there’s a plugin available in the WordPress repository that adds one setting to the general settings section of WordPress, allowing you to choose the category that you’re going to use to send photos into. The plugin then filters these posts out of the homepage loop. And it works to solve the problem.

Ideally I’d like to see the option to send the photos from the app into a custom post type. A lot of themes are set up like this, with a page template and image sizing that provides a specific layout for photos. Perhaps in a future version (John I hope you’re reading this!). But let’s not forget that Pressgram is only just out; the amount of work to get it to this level is not trivial.

The other angle on this is that to get any kind of hold on a user base, the setup and operation has to be simple. How many casual users of WordPress are going to get their hands dirty with custom post types in order to play with an app like this?

As noted above, Pressgram integrates with the Facebook and Twitter settings in iOS. So no surprise that the process of sending images to your accounts there is very easy. While the sending is easy, what it looks like when it arrives is not so good. I’m sure that this will be dealt with in time but when the image arrives in your Facebook timeline it’s a little messy. 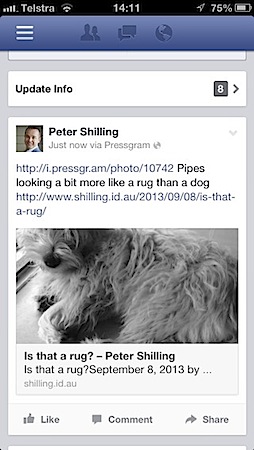 Each photo prints the URL of the image (http://i.pressgr.am/photo/10742), your post content, then it prints the URL to your WordPress post. Underneath the photo, the post title appears twice, then the author and the date.

Again, too many options for the user to choose from is probably not the best solution here, but I’d like to see a cleaner layout when the image arrives on your timeline.

The layout on Twitter is better. It prints the post content, the URL to your WordPress site, and the image is included via a pic.twitter.com URL.

Of course you can just use Pressgram as a means of transporting your photos to your WordPress site, Facebook and Twitter, but it also has the beginnings of a new social network. If you’ve used Instragram then you’re already familiar with the social interactions Pressgram has to offer. The ability to follow and be followed, search for users and hashtags, and like photos; it’s all there and easy to figure out.

It’s a little bit funny in that there are obviously a lot of people that have followed Pressgram from Kickstarter to John’s blog and social media posts. Pretty much everyone who joins follows John—so right now he looks like a bit of a shining star. There rest of us, well we all look a bit lame. It’s early days!

While Pressgram is getting a lot of coverage in the WordPress landscape, the other place you might expect the app to get some air time is the iOS/iPhone environment. But a quick search on CultofMac.com, Tuaw.com and iMore.com (all popular Apple / iOS news blogs) all reveal that not a single post was published on the new app and social network that goes with it. Obviously a reflection of the fact that John comes from the WordPress world, rather than that of Apple.

It does present an interesting problem though. While we all know that WordPress is gaining market share each and every year, does the end user follow WordPress blogs or news sites in order to find out about an app like this? If the answer is no, then it means we all have to be aware of the fact that in order to promote our WordPress wares we need to work out how to do it more effectively to a wider audience.

In the meantime a social network that is heavily weighted with power WordPress users and developers is not such a bad thing!

Who else is on Pressgram? Thoughts?